Facebook management isn’t the only area in which Dave LaRock has exhibited an inability to tolerate disagreement or criticism, however. A need for control coupled with entitlement, the sense that he has a special right to operate above the law, seems to be the character trait that most animates him. His 2012 arrest (final disposition still pending) for trespassing and destruction of property has become somewhat well known, prompting a falsehood-riddled “damage control” post (authored under an unaccountable pseudonym on a Republican blog) that LaRock is now distributing as his official statement on the matter. In that case, both the commission of the crime (theft and destruction of a neighbor’s business sign he didn’t like because in his mind it was “pornographic”) and LaRock’s attempts to avoid going to court for it exhibit this trait. Even during the 2011 campaign, when he was operating on behalf of Geary Higgins, LaRock advocated a rogue approach to yard sign management, suggesting that volunteers should “go around and take down the [Republican Mike Chapman] signs posted next to [Democrat Malcolm] Baldwin signs.” The fact that voters had the right to display signs in support of both candidates didn’t seem to be of consequence to him, and there is compelling evidence that signs were taken from private property found in the comments of another campaign operative working with LaRock.

And LaRock doesn’t just scrub his own site of negative information – he works hard to scrub other sites, too. More recently, he demanded that a letter to the editor written by one of his former interns be removed from the Loudoun Times-Mirror (the letter, which describes LaRock’s behavior toward his interns as “arrogant and high-handed,” is available here in its entirety). LaRock’s campaign also complained about a comment on the Blue Ridge Leader site, insisting that it be removed (it was, because it arguably violated the site’s Terms of Service, besides being one of the stupidest things I have seen in a while). But in the case of the comment, the problem wasn’t that it was critical of LaRock or of his positions – in fact, it was perhaps too supportive of one of them. Here is a screenshot: 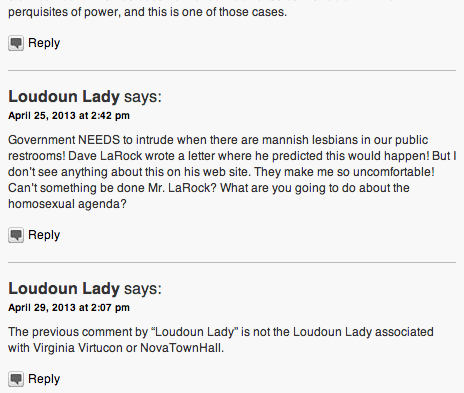 In order to understand this odd outburst, you need to read Dave LaRock’s letter to the editor* in the Leesburg Today. He, like other such politicians, sums up his anti-gay ideology on his website with some insipid phrase like “supports traditional marriage,” but the truth is so much more…interesting. LaRock doesn’t merely oppose marriage equality. He actually opposes something as mainstream as an inclusive employment non-discrimination policy at the level of county government. In his 2011 letter, LaRock crudely attacks the Board of Supervisors’ addition of gender and sexual orientation to the list of non-merit based characteristics that can’t be the basis for county employment decisions, the sort of policy that’s a no-brainer for Virginia’s private sector employers and is supported by something like 90% of Virginians. This administrative update to the county’s human resources policy was uncontroversial save for the expected temper tantrum of Eugene Delgaudio, and has been unremarkable ever since.

But LaRock describes support for this common, ordinary policy as “far left” and “out of touch with higher moral principles,” suggests that without discrimination against LGBT county employees Loudoun will no longer be a “great place to raise a family,” that a “practical consequence” of the policy will be “to see Loudoun turn into a San Francisco-like circus where anything goes,” and finally, revealing the creepy thoughts that apparently inhabit his mind, that “children” will be endangered by “cross-dressing county employees in public restrooms.” 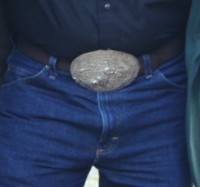 Keep your eyes front and center and your mind on your business, Mr. LaRock

This is precisely the kind of known, defamatory falsehood that defines anti-gay hate groups like the one Mr. Delgaudio makes his living from – and the Blue Ridge Leader commenter cited above is precisely the kind of person for whom it was intended. This is the kind of person who, when she sees a woman in the ladies’ room she decides is not feminine enough, presumes to tell her she’s in the “wrong” bathroom, or runs to get the manager – or worse. The dignity and safety of women in public restrooms is all too often threatened by exactly the kind of ugly invasions of privacy LaRock encourages.

LaRock’s crotch politics letter garnered a bit of much-deserved ridicule at the time, including this response:

Here’s what I want to know: Why is LaRock so hostile toward people who may be different from himself? Moreover, why is he thinking about other people’s sexual orientation and bodies in public restrooms? I (for one) wish he would stop.

Yes, I think we all do. Sooner or later, engaging in obsessive, vulgar thoughts about other people’s bodies and what they may or may not be doing with them will get you in deep trouble.

*The letter is also reproduced it in its entirety here because of the author’s penchant for demanding that newspaper editors take down things he doesn’t like.