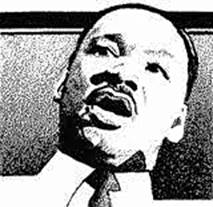 But we don’t’ seem to appreciate that a Supreme Court that compromises voting rights is also wrong.

So many years later, we have a Supreme Court compromising that right to vote.

We have states interposing obstacles to that vote.

King sought further to remedy an American system that valued property over persons and, in the bargain, short-changed workers in pay and benefits, and denied them credit, housing, education and many other opportunities – all because of race – in a form of violence, economic, that is every bit as invidious and punishing as physical violence.  The Commonwealth of Virginia brags that it attracts businesses here because workers have fewer rights, fewer benefits and thus cost less.

King was praised by many for his Ghandian ethic of non-violence in Montgomery, also on the Freedom Rides, in Albany, Birmingham and Selma.  King was dumb-founded therefore when the public and even his strongest supporters challenged his decision to oppose the war.  They told King that civil rights and peace didn’t mix.  King said, “the relationship of this ministry to the making of peace is so obvious that I sometimes marvel at those who ask me why I am speaking against the war.”

King saw capitalism, and the military industrial complex, entangled in the racism at home and the war abroad.  He saw profit-taking at the cost of human life.

Eisenhower had warned against the military industrial complex but King underscored its racism, because it sent the poor and minorities to war, sent “their sons, and their brothers, and their husbands to fight and die in extraordinarily high proportions to the rest of the population.”

War is still with us even as we consider whether to engage in another war theater, this time Syria.

There has been a perverse march to the rear – a taking back of civil rights, a compromising, diminishing and elimination of the gains that King made.  Nor is this assault against individual rights and liberties limited to blacks and minorities.  Ask any woman.

Civil rights and liberties are under siege.

Our political candidates talk compassion but make light of feeding the poor, of housing, of job training, of helping the unemployed.

Robert Kennedy said to those in South Africa, still fighting apartheid, but making progress, how they were making a difference for the better – and why they would succeed.

Kennedy said, “It is from numberless diverse acts of courage … that human history is thus shaped.  Every time a man stands up for an ideal, or acts to improve the lot of others, or strikes out against injustice, he sends forth a tiny ripple of hope, and crossing each other from a million difference centers of energy and daring, those ripples build a current which can sweep down the mightiest walls of oppression and resistance.”

Each of us must act to bring down the walls of oppression and resistance right here at home.

We owe it to King and ourselves to resume our march for, while we may have seen the Promised Land, we’ve not yet arrived there.