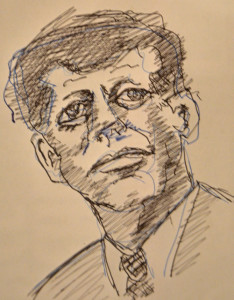 Jack Kennedy was a force in life and his death broke a promise made that this nation was different in that it celebrated courage, culture and change.

I was a freshman at Fordham Prep in the Bronx in 1960 on the way to a Latin class when I saw the University students going to the gymnasium in great numbers.  I had some time before class, though not much, so I ran to see what it was all about, followed them, one by one, all taller, through the narrow doors of the gym, and pushed with the others into the large area where we had basketball games.

The gym was full of standing students and teachers, and I made out, like in a B-movie, a bright light from the left shining on a man talking to this mostly first generation college audience that was disproportionally Irish.

It was Jack Kennedy, smiling broadly and making his characteristic gestures, pointing with his right finger in the air before him, painting a picture of ideas, his jaw jutting forward, challenging these students, by his word and manner, to make a difference.  His pauses invited clapping and cheering, smiles and laughter.

I left this amazing place, the sounds duller as I returned to class, to make my class late and sat in a reverie the rest of the afternoon thinking about what I’d observed and heard and felt.

This man was what life was about, mixing into the issues of the day, trying, as he said, to make a difference.

He inspired a nation to go to the moon, to avoid a nuclear confrontation, to make steps toward equality, to introduce beautiful art and music and style to a nation thirsty to meet a higher calling and destiny.

He was cut short on November 22nd years ago but he still inspires us to be more than we’ve become.