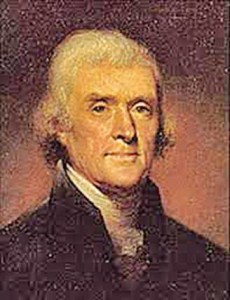 When Thomas Jefferson penned the words in our Declaration of Independence in 1776 that “all Men are created equal,” he stated what the Continental Congress believed to be the proper condition of men in the colonies in relation to the offenses suffered under Great Britain.

Unfortunately, all men were not treated as “equals” within the several colonies either.

Even after our federal constitution with its Bill of Rights, slaves and women enjoyed no rights, unalienable or otherwise.  They were property.

The Declaration was an unfulfilled promise of equality.

A former U.S. Senator said: “The enlargement of liberty for individual human beings must be the supreme goal and the abiding practice of any western society.”

Our nation has struggled to reach this goal, for example, by growing the vote from the disenfranchised slave to the emancipated free man, and from a man who votes to a women who does as well.

A local Virginia state legislator, however, wrote recently that he knows that his Creator opposes gay marriage for the men and women God created.

This same legislator relies on a Tennessee trial court judge to contradict all the other federal and state cases across the nation that say otherwise including the federal appellate court right here in Virginia.

It will truly be a sorry legacy for our generation if we can’t see our way clear to enlarge liberty for gay couples, who are our friends, neighbors, and family, and allow them to marry.

If we fail to act, when the wave of the next generation passes over our bodies become dust, they will rightly question why we were so intolerant.

The Tennessee trial court judge, the Honorable Russell E. Simmons, Jr., refused to recognize in Tennessee a same sex marriage lawfully made in Iowa. Judge Simmons insisted his ruling was “rational” because “marriage and procreation are fundamental to the very existence and survival of the race,” citing an 1828 edition of Webster’s dictionary, and because same-sex couples cannot have children.

One transparent flaw in the Judge’s “reasoning” is that same sex couples can and do have children, both naturally and by adoption.  More than that, however, when a heterosexual couple seeks a marriage license, we don’t require that the couple give assurances they can have or that they want children, nor do we put any age limits on marriage when the union cannot produce children.  In other words, marriage does not create any obligation to have children.

Virginia prohibited interracial marriages but the Supreme Court declared this was unconstitutional in Loving v. Virginia.

Our 14th Amendment to the Constitution, another enlargement of personal liberty, provides “no state shall make or enforce any law which shall abridge the privileges or immunities of citizens of the United States … [nor] deprive any person of life, liberty, or property, without due process of law, nor deny to any person within its jurisdiction the equal protection of the laws.”

It is time we enlarge the liberty of gay couples to marry, consistent with the Declaration of Independence and with our amended Constitution, recognize our words by public acts, and make this our practice to achieve liberty, not waiting for the next generation, but setting this intolerance right ourselves – and now.