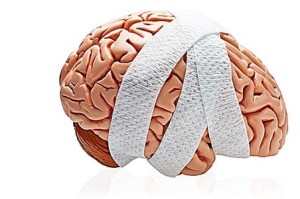 Local parents who wanted to have their sons try out special helmet sensors were rebuffed by our County’s schools; it was a light weight micro-electromechanical, tri-axial acceleromoter capable of measuring acceleration from any direction, attached to the helmet, interfering not at all in the field of play. Good enough for the pros, but not for our kids. A no-brainer you might say.

A few days ago, medical experts and the National Football League (NFL) gathered to discuss how to diagnose and treat a concussion.

While the League tells us that concussions are manageable short term problems, there’s a lot of proof that’s not even close. Not when 30 percent of the pro players are likely to develop Alzheimer’s or some other lesser form of dementia. Recently, NFL ex-player, Adrian Robinson, Jr. killed himself; he was diagnosed with chronic traumatic encephalopathy. When 91 former NFL players donated their brains to research, only four were found to have no connection to concussions and head traumas.

Concussion are not limited to our playing fields. Do you remember falling from monkey bars as a kid? Did you head the ball in soccer? Have you fallen off a skate board? Were you ever beaten?

These hard to remember events may indicate that you’re at risk as an adult if you have a second fall or hit.

One domestic violent victim thrown violently to the ground, struck on the head, described what it was like, having experienced a concussion:

VICTIM: “The hardest parts are being slower, everything takes you longer. When it’s a less physically noticeable concussion, people think you are fine but that you are just not paying attention. It’s that you can’t pay any more attention than you are. You can suffer fatigue sooner. You run on fumes. You have cluster headaches. It is hard to know where your body is in space. It becomes harder to heal from other injuries you may have suffered with the concussion. You suffer dizziness. It’s like verbal abuse. The injuries are just as detrimental as physical but not visible – and so not believed. Words are lost. Keeping track of things is lost. Dreams are lost. What you’re doing doesn’t seem to be a logical pattern. You find you can remember so much so clearly and then other stuff you once knew just vanishes– like it never happened. You lose memories and pictures that retained these memories. Concentrating is exhausting. You suffer confusion. ‘In the moment’ is how you must live and you are incredibly vulnerable. Others think you’re lazy or indifferent, like the bias against those children with learning disabilities that might be brilliant and extraordinarily insightful and creative people but, because they are different, are put in ‘slow’ classes. And, to top it all off, in the court system you become re-victimized by the assailant who caused those injuries and uses the cognitive deficits he created to discredit you at trial under cross-examination. You have to heal first – if the court will give you the time.”

Look for these symptoms to detect a brain injury.

But to avoid suffering them yourself, reconsider high impact sports, activities, indeed any hit the head takes, on purpose or accidentally; failing to be vigilant, could adversely affect the rest of your life.