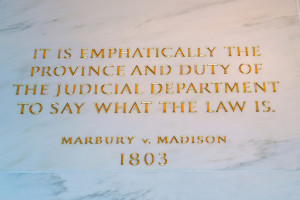 George Orwell in a spectacular essay, “Politics and the English Language,” warned that “the slovenliness of our language makes it easier to have foolish thoughts,” and, when published, such “language can also corrupt thought.”

Alternative Law is what the extreme right devised in the 80s to contradict the Supreme Court’s decisions recognizing our individual rights that protect us from an over-reaching and corrupt government.

The extreme right, the alt-right, the Federalists, devised this new “way” to “understand” the law, insisting that jurists divine “the original intent” of the Founders who authored the Constitution.

A moment’s consideration reveals how preposterous is the notion that we confine our jurisprudence, emphasis on prudence perhaps, to what we “imagine” was the intent of the Founders, who insisted on the fiction of fractional slaves to apportion to the southern states a more favorable representation in the nascent congress.

We cannot possibly embrace the Founders “original intent” to deny women any rights – although the architecture of the “new way” seeks to constrict and deny the hard won rights of the modern woman.

We now reject out of hand the Founders “original intent” that no man may vote unless propertied and of a certain financial standing,

The Founders appeared, however, to appreciate the imperfection of their intent and of the Constitution they constructed as they provided us with a Constitution that could and has been amended first, right after the document was drawn and next, over the years since.

The Founders’ one certain “original intent” therefore was that change was inevitable.

In the early years of our nation, Chief Justice John Marshall made it clear in Marbury v. Madison that the Judiciary decided what legislative or executive actions were unconstitutional or unlawful, and this was a power reserved to the Judiciary, and not to the Legislative nor Executive Branches.

Mr. Trump has recently troubled himself over how judges could overrule his Muslim ban as unlawful or unconstitutional.

Plainly, Mr. Trump is entirely unfamiliar with the import of the court’s decision in Marbury v. Madison.

Judge Gorsuch is a firm believer in divining the “original intent” of the Founders and questions why any person challenging a legislative act doesn’t first and necessarily ask the state legislature instead of the court to decide the question.

In these perilous times, we do not need a judge on the Supreme Court divining intent, really in order to frustrate our individual rights and liberties, pretending to know another man’s mind in the bargain.

Nor do we need, nor can we tolerate a jurist, who would throw over the responsibility to call a legislative or executive act unlawful or unconstitutional, not when Mr. Trump’s Muslim ban is presently declared unlawful and unconstitutional by the lower courts.

We must pass over Judge Gorsuch and await a more worthy jurist.  If one is not forthcoming, then we shall have a court of 8 justices, or perhaps even 7.