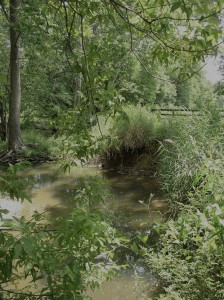 Lovettsville’s Chris Van Vlack, an Urban/AG conservationist, with the Loudoun SWCD, made a presentation at the Potomac Watershed Roundtable about a recent FEMA policy, that Daniel Moore, from Virginia DEQ characterized as “flabbergasting.”

Greg Prelewicz, of Water and Wastewater Utilities, said he found it “baffling.”

It’s a FEMA policy that adversely affects Loudoun County’s efforts to preserve and protect our soil and water.

Chris Van Vlack at the presentation

The Potomac Watershed Roundtable Forum is “a regional government-citizen forum that promotes collaboration and cooperation among local governments and stakeholder interest groups,”

By way of background, Chris explained that there is a regular set of best management practices (BMPs) that keep our waters clean and flowing to the Potomac without eroding the rich soil so necessary to farm and garden.

Keep the animals (and their “nutrients”) out of the water, and plant cover crops and trees to slow the flow of water that might otherwise carry away the soil.

It’s so important a function that federal, state and local authorities, by conservation districts across Virginia and the nation, share the cost with farmers and land owners to make these remedial practices possible.

The cost of these practices are funded up to 80 percent of what it costs to fence in livestock from streams, to install water troughs, to implement livestock crossings, and to plant what restrains and controls surging rain waters. 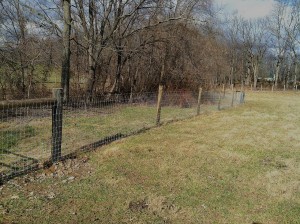 Fencing by a stream

These best practices were instituted after the infamous tragedy of the dust bowl, so vividly described by John Steinbeck, in “Grapes of Wrath.”

It was the ignorance of right-minded soil and water practices that caused choking dust to block out the sun, sweeping the country in high winds from west to east, killing people, livestock, and crops.

Now FEMA says that Loudoun County may not use these salutary best practices in any flood plain.  They convinced the County earlier this year to conform with what many of the speakers characterized as a wrong-headed policy.

In the last 40 years, none of these practices, not any fencing, nor riparian planting, nor planting trees, has in any way, shape or form compromised the flood plain, nor even prompted a complaint from any quarter about these practices.

Chris said, “When intercepting the rain fall, it allows the water to infiltrate into the earth.”

That, Chris explained, reduces the effect of flooding.

But FEMA says that planting trees is “development” and that’s not allowed in a flood plain.

Of course, if one plants nothing in a field, unplanned trees and growth will fill any field. 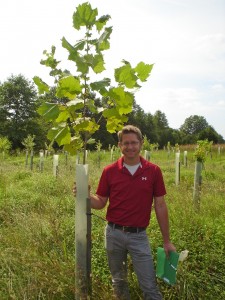 One speaker referred to this FEMA interpretation as “the god exception,” because FEMA insists that unplanned growth by nature including tree growth and cover is okay, but FEMA refuses to accept any planned planting that is “man made.”

One speaker said the “legal definition of development does not capture the planting of trees.  That’s absurd to think so.”

Another speaker referred to this “as a policy preferring chaos.”

Another speaker suggested “walking through a field and dropping acorns, as a squirrel might,” a variation on the “god exception.”

FEMA’s own regs don’t describe these practices as “development;” the regs say that “development” means “new construction, substantial improvements or other development (including fill).”  In other words, not fences nor planting

FEMA says, however, that a riparian buffer can be planted if an engineer will say that the planting will cause “no rise.”

First, the regs say that a rise of a foot is permissible, but, quite significantly, there is no indication these best practices will promote such a rise.  There exists no compelling model that makes this a serious concern.

FEMA, however, demands that each site present a study, certified by an engineer, and these engineering studies “cost thousands…[and] are not eligible for [the 80%] cost share…[and it’s the] [s]ame process for livestock exclusion fencing.”

Thus, FEMA has done what it can to frustrate these practices in Loudoun County and nowhere else in Virginia or the nation.  At least, not yet.

John Peterson, said he’s concerned that “[i]t’s not just Virginia’s problem, it could affect every state.”

One speaker suggested that FEMA was perhaps suffering from an “intelligence deficit.”  There has been past criticism of FEMA for its core competence.  The group was otherwise at a loss to explain FEMA’s conduct.

In the end, however, it is passing strange that an agency charged with redressing disasters favors a policy that, some argued, may promote disaster.