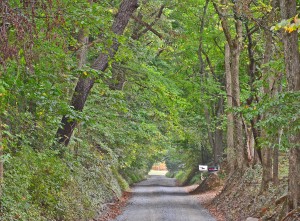 These local roads course through nature’s living “tunnels” and, this time of the year, the leaves change and fall. 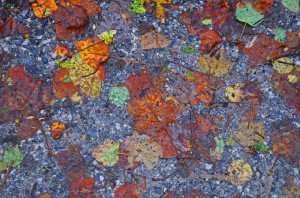 Better than driving, however, is to stand on a path in a forest spread around you, the leaves and bark close to the touch.

You might wonder at the green cathedral of trees reaching for the sky, a grand White Oak, the ever-present Pine, the “helicopters” and sweetness within the brilliantly colored Fall Maple Trees, Hickory nuts to feed the wild, salicin pain relief from a bowing, swaying weeping willow, the sweet smell of Magnolia, Robert Frost’s Birches bending to the left and right, Sasafras with its varied leaves, black walnut woods and the nuts underfoot, Hemlock – A Socratic fave, Beech trees dropping their bitter fall nuts, Persimmon tree and their sweet bright orange fruit, Hawthorn trees with their clusters of white or pink flowers and bright red berries in the Fall, and, do you suppose that was Daphne whispering from within a nearby Laurel, or just a breeze.

The ancient Irish believed that the Ash tree had healing qualities and saw it as one of a trilogy of sacred trees, along with the Oak and the Hawthorn.

But the Ash tree is under siege by the Emerald Ash Borer, that has killed tens of millions of Ash trees, and threatens to kill many more.

The forest is about a lot more than the canopy of trees, it’s built on a floor of soil, dead plants, animal life, of seemingly limitless variety, grasses and wildflowers, bushes and shrubs.

­Next, there is how and why this is good for your health.

You might not appreciate that a forest is good for your health, can increase your immunity, lower blood pressure, ease the stress hormone cortisone, and reduce anger.  As a result, you might live longer. 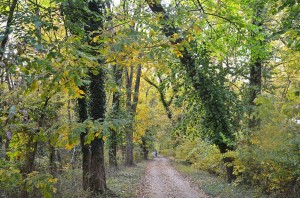 Henry David Thoreau, in his 1854 essay, explained, “I went to the woods [at Walden Pond] because I wished to live deliberately, to front only the essential facts of life, and see if I could not learn what it had to teach, and not, when I came to die, discover that I had not lived.”

In 1982, Japan found what Thoreau knew intuitively, and instituted a national public health program, promoting topiary as therapy, “forest bathing” they called it, coining the phrase, shinrin-yoku, it was just being with the trees, standing in the forest was enough, relaxing was enough, rather than doing anything, one need not walk or run, just stand.

There is value in just inhaling phytoncide, the aroma of the forest, produced to help plants & trees protect themselves from harmful insects and germs, since found to strengthen the human immune system as well.

In 2009, Quing Li, a professor at Nippon Medical School in Tokyo, studied the activity of human natural killer (NK) cells in the immune system, white blood cells that attack viral infected cells and tumor formation, measuring these cells before and after exposing test subjects to the woods; what they found were significant increases in the number of NK cells.

They discovered that these “therapeutic landscapes” not only increased immunity, they decreased tension, reduced hostility and anger, and increased liveliness among the participants.

New York State’s Department of Environmental Conservation credited the findings of Quing Li, “that visiting a forest has real quantifiable health benefits, both mental and physical” and “[e]ven five minutes around trees or in green space may improve health” and we should “[t]hink of it as a prescription with no negative side effects …”

On the negative side of the ledger, but proving the point, New York reports that the Emerald Ash Borer’s destruction of the Ash Tree has prompted additional statistically unanticipated deaths, both cardiovascular and respiratory illnesses, where the Ash tree was lost.

So, if one wants to be healthier and live longer, just standing in a forest is a really good idea, and perhaps one should think twice before tearing down a tree or destroying a forest. 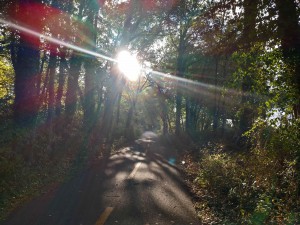 A running/biking trail through the forest

One thought on ““FOREST BATHING” – GOOD FOR YOU”