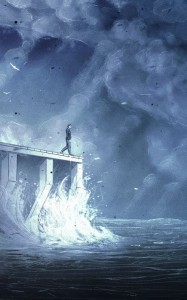 More: Oh? And when the last law was down, and the Devil turned round on you — where would you hide, Roper, the laws all being flat? This country’s planted thick with laws from coast to coast — man’s laws, not God’s — and if you cut them down — and you’re just the man to do it — d’you really think you could stand upright in the winds that would blow then? Yes, I’d give the Devil benefit of law, for my own safety’s sake.

We daily see the effects of a lawless Chief Executive and our leaders think they are slipping the punch by not doing their job, by calculating what they can do, get away with, “manage” us, allowing the laws to be cut down.

Can our Republic stand in the winds already blowing against a trust in government and its leaders?

I’m fond of quoting Aristotle, his teleological inclination, that nothing improves your aim like having a target.

The law we wrote in the constitution and its amendments and over so many years of legislation made law is the target that we agreed as a people was who we were and how we conducted our “business.”

But what do we witness?

We are not compromising a zoning law that will destroy a farm and a neighborhood, itself quite offensive, odious I believe, and a battle fought in every county of the nation at some time or other.

No we are engaged in something so much more dramatic and hurtful.

We are compromising a Republic, by which we exist as a community, with certain freedoms at risk, already at sufferance, achieved at the cost of blood sweat and tears, sometimes pitting family and friends against each other, even killing one another in a civil war, this last conflict waged to define and remedy our constitution’s original pernicious compromise permitting slavery, persisting even unto now in more “nuanced” incarnations, when not outright racist, as is evident by the conduct of our Chief Executive.

Benjamin Franklin said in 1787 that we had a Republic “if we could keep it.”

The greatest fear about a chief executive at the constitutional convention was that he would be a monarch – and so many hours and days were spent devising mechanisms to control the power of our single chief executive – so we could “keep” our Republic.  Among those tools was the authority to indict or remove an offending President.

It’s not so clear we have the resolve to invoke the mechanisms created for just such a crisis as we have now, to preserve our Republic and its freedoms.

It’s no wonder that JFK’s “Profiles in Courage” is such a thin book.

Or we won’t stand in the winds we’ve released like those in the Odyssey that blew Homer’s Greek hero off course, wandering for years, seeking his way home to Ithaca.

Perhaps I’m wrong. I see this gathering disaster so clearly.  I can’t see it any other way.  I’m encouraged because so many others see it as well.

But our leaders hesitate – fail their oath – and they are failing all of us who see that it’s about the law and what happens in a lawless nation, what’s happening right now.