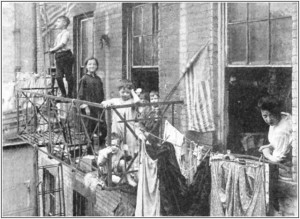 (Incidentally, these fire escapes, for us kids, was like having open air balconies – as good as any populating the elevator towers on the east side silk stocking district – it was our place of freedom and, yes, escape.)

This nation’s metaphorical fire escape, if the smoldering congress concerns itself only with keeping their phony baloney jobs, is to have candidates challenging sitting dems who chose to do a head fake, mutter a mantra, “I support an inquiry,” instead of fulfilling their oath of office and pressing the inquiry toward impeachment.

Trumpian despotism can not be tolerated any longer.

Bromides are not what we need in these trying times, in this historic constitutional crisis.

If the “inquiry” line is a rhetorical stall, stage magic, a chimerical pirouette, our congress is handling us while allowing our republic to fall into ruin.

We need primary candidates challenging sitting Dems, yes the so-called Dems, who did not favor impeachment, but who favored an “inquiry,” and perhaps not really, only dishing words to discourage us from pushing them to act.

Hate to say it but it’s absolutely true – Chair Nadler got more backbone when he drew a Dem primary candidate from the west side of Manhattan.

Will no one challenge the Speaker?  A fair question.

All of us daily observe in plain view Mr. Trump’s offenses against this nation in contravention and total disregard of its laws and with hostility to we the people and our allied nations and trade partners.

So we need “a fire escape,” and the metaphorical answer, is a primary candidate to challenge ever faltering and indolent Dem, proven to have little or no intention to follow through on impeachment.