I was amused to discover over coffee this morning after the storm, that during the night Too Conservative had nothing better to better to do than poke at my art and interest in animals.  They did find a typo and thanks for that.  Probably didn’t like the spaniel on my palm card either, but this just shows how tone deaf the Republicans are in Loudoun County, a place where people actually love their pets, horses and livestock.  Maybe Too conservative doesn’t.  In fact, I think the Republicans skipped the County Fair.

To me, conservative should mean conserving what resources we have, not wasting them. Surely, any conservative would agree that preserving livestock, the principal means of income for many Loudoun citizens in more than on district, is a good idea, same for protecting pets in every district.  I never saw that as Blue or Red.  The fact is, as a global issue, of the poorest people on earth, about a billion (including Americans) depend on livestock for food or income, but so do middle class Loudoun residents who work on farms, not just the owners.  If you take away the livestock from the very poor, people will starve or be unable to support their families. That’s the animal welfare I mostly focused on in Hurricane Katrina and Cyclone Nargis, or when moving cattle off of an active volcano in Costa Rica, or negotiating standards with the Red Cross and the UN to help refugees and the internally displaced have a sustainable life after they returned home from a war or a flood, or when I worked on combating climate change  — in other words, building human jobs and saving human lives, real economic development in other words. 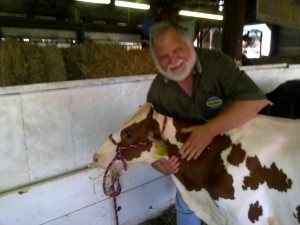 Larry with cow at County Fair

Again, never saw this as a Red or Blue issue.  So I guess what this all means is that once again Republicans don’t know their science or economic development principles, just politics.

It was fun however reading the comments on my art, the good and the bad.  I’m having a show in January and will make sure everyone is invited.

1 thought on “Economics, Animals and Art”