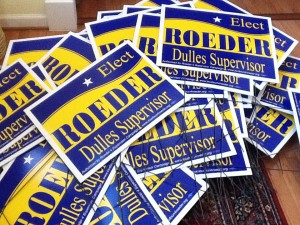 Preparing For a Debate

Last night at South Dulles Alliance and today at the candidate’s forum for the Loudoun Chamber of Commerce, I engaged my Republican opponent and was ahead in both instances.

Matt’s one argument is that because he works at the US Chamber of Commerce, he knows how business works.  But just being a functionary/spokesman who breathes the same air as real economists doesn’t mean you are an economist or that you have learned how to do real economic development.  He didn’t rebut my argument, or that I actually did work as an international commodities economist for many years in the US Department of State and had crafted national stategies.  In fact, he admitted my career is distinguished!   Score TWO for the Roeder team.

I do like Matt on a personal level; but the truth is that he is to an economist what a news reader is to a journalist.  I’ve actually been asked to write a text book on economic development.  And let’s not forget he will be an “absent Supervisor,” meaning working full-time in Washington, DC (not in Loudoun) for a conservative firm that doesn’t have our interests at heart.

But the clown of the morning was Eugene Delgaudio whose bluster, anti-Metro and anti-union rhetoric knew no rational bounds.  Noone, not even the Republicans, could keep a straight face, listening to Eugene.  But though they were all smiling, we know they agree with Eugene on most of  issues, and that’s just dangerous for Loudoun.   Valdis, Malcolm, Kelly, Tom, Andrea and Denise did very well, and boy do we need them.   Recommendation.   Make a contribution of $100 tonight to a Supervisor Candidate.   www.loudoun4roeder.org