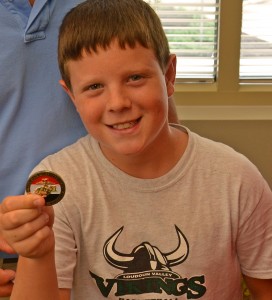 Benjamin Thomas Powell, 11, is a 6th grader in Middle School at Blue Ridge.

Ben has a ready smile, a lot of enthusiasm, that’s in fact quite infectious, and he especially loves soccer; Ben even likes school, every subject, but especially science.

Recently, he went with his Mom, Suzanne and Father, Brent, to the Olive Garden Restaurant in Sterling.

It was busy that evening and so they sat at the bar; Ben was laughing, consuming lasagna with abandon, “having a good time,” Ben said, and talking up a storm with his Mom and Dad.

Unbeknownst to Ben, there was a young marine back from service in Iraq, dining with his family at the same restaurant.

We live in a time when persons talk about community and connectedness but are inclined in their day to day life to act only selfishly, on behalf of themselves, turned increasingly inward, mirroring what our technologies say about us, i-Phones, i-Pads, i-Tunes, i-Pods, all about about I, and so much less than when it used to be about “us” about “we” as a community of people.

But this young soldier, in his late 20s, had seen things this family at Olive Garden had not, and perhaps Ben, if he’s lucky, never will, and it affected this young marine.

He happened to tell Ben’s father, “I picked up your check.”

Brent asked, “Why would you do that?”

The short-haired Iraq vet said, “It looked like your son was having a good time with the family.”

Brent told his son that “that marine,” sitting a short distance away, “picked up our check.”

Ben got up and ran over to talk to him.  The marine reached into his wallet and gave him a medallion.  He said, “I want you to have it.  I think you’ll really enjoy it.”

Then he caught himself, went back and asked, “What’s your name?”

Ben walked away but ran back a second time to thank Kelson, this time for the gift of the soldier’s medal.

Kelson said, “My company commander gave me that.”

Kelson told him, “It’s a lot different here than it is in other places.”

This gave Ben a lot to think about and he’s been telling his friends about that meeting and his medal – and thinking about what it all means.

Roger Waters wrote a song, and the stanza finishes, “I recognize myself in every stranger’s eyes.”

Ben and Kelson made that connection.

A noted German philosopher, Arthur Schopenhauer, studied how individuals are moved to reach out to others they don’t know, to risk their own lives, as if it were their own life at risk, so they could save a stranger they didn’t know.

No doubt some aspect of this soldier’s own remembered youth combined with his service and sacrifice in the Iraq War, putting himself at risk for friends and neighbors and persons he’ll never know at home, informed his generosity to Ben and family that evening at a local restaurant.

Ben and his Mom Suzanne have already decided to give food to Interfaith relief.

Ben is also thinking of becoming a Marine like Kelson, or, better yet, if you ask his Mom Suzanne, finding a way to make peace so that we don’t war, so that we argue and work to agree instead.

Ben never got Kelson’s last name, and perhaps that’s how it should be when strangers help each other.