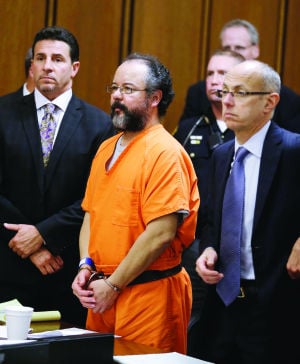 Craig Weintraub (no relation) and Jay Schlachet, the lawyers who represented Ariel Castro, “the 53-year-old former school bus driver who kept Amanda Berry, Gina DeJesus and Michelle Knight captive in his house for about a decade” have an exclusive interview in the Cleveland Jewish News. If you’d like to know what it’s like to be a defense lawyer in a big media case, read it. If you’d like to understand liberal Jewish faith, read it. Here are a few excerpts.

“Weintraub and Schlachet, who are Jewish, stressed that their faith figured in how they represented Castro in a case that ran 90 days from start to finish and continues to bring worldwide attention to Cleveland.”

Despite the “sensational allegations” against him, Castro was entitled to counsel, said Schlachet. “We knew that we picked an unpopular cause to champion, and frankly, from a personal standpoint, I think it’s important to represent unpopular causes because, first of all, it’s what we took an oath to do, and it’s completely consistent with my Jewish upbringing. We actually did a mitzvah representing this man.”

“Here’s how it’s a mitzvah,” said Weintraub. “We saved him from potentially lethal injection and 20 years on death row, which would have cost the taxpayers and the community millions and millions of dollars, and we spared the women the anguish and ‘revictimization’ of events.”

“We have familiarity with forensic diagnoses and clearly felt that he fit the profile of sociopathic disorder as well as narcissism and likelihood of antisocial personality,” Weintraub said. “So the public can easily label that as ‘monster’ and ‘evil,’ but we also look at it in a forensic sense as a mental health issue, because someone doesn’t get to this level of depravity and have the ability to lead a double life unless there are significant mental health issues.

“I think that labeling is a copout, to some degree. I think there needs to be, and we’re hopeful there will be, some forensic studies of him, to try to understand if there’s a way we can find clues in personalities like his so the predators are pulled off the streets and the public is protected. … We think it could be extremely valuable to society if we could get a group of forensic psychiatrists to conduct evaluations, interview him, interview the family members, make a determination as to whether it’s a genetic issue or organic issue, or it’s limited simply to mental health.

This story has some Loudoun implications for two reasons. First, one of Supervisor Delgaudio’s online defenders attempted to attack me because I’m from Cleveland and share Weintraub’s last name. After reading the interview, I can say that I would be proud to be related to Craig.

Secondly, and more importantly, this story draws a clear line between conservative ideology and liberal ideology. Conservatives claim to be pro-life, and they claim that their faith stopped the slave trade. For example, Chuck Colson’s acolyte Eric Metaxas wrote a book about William Wilberforce. They also claim that their faith ended Jim Crow, when in fact, it was a broad spectrum of activists and Ghandi’s Hindu-inspired non-violent practice that lead to voting rights and desegregation. The liberal rabbi of my hometown synagogue was beaten on one of those freedom rides, and my synagogue later became one of the first in the area to bless gay nuptials.

Our faith teaches us that *all* people have inherent dignity. The interview makes that clear. Weintraub and Schlachet tried their best to protect Castro, the victims and the community at large. Their work was a good deed, a mitzvah. Compare their work to the “pro-life”  response of a typical Loudoun “Conservative” to the premature death of Ariel Castro.

Cleveland kidnapper Ariel Castor was found dead last night of an apparent suicide while in jail in protective custody.  Couldn’t happen to a more deserving man.