He was putting on a political show—one, like so many during his 14-year board tenure, that was woefully short on substance, but with potential to help fuel his campaign fundraising machine.

Supervisor Delgaudio has made a political career out of playing an outnumbered, and out-voted, victim—using that as the crutch to make up for his lack of interest in doing the work required to make a real difference in government.

He *is* making a difference. He consistently wins elections, appears in the press, raises money, and until recently, voted to set policy on the powerful finance and transportation and land use committees where he produced the votes to raise the money to continue to win elections, … with rhetoric like this.

The liberals rhetorically hack at me with blunt axes to destroy me and our conservative values. They target me as I am the strongest conservative. I am your firewall, your foundation, your advocate for our values…

The “victim” Sterling Supervisor victimized many in the county – ask the Raspberry Falls residents and the commuters stopped, interminably, at their “special light.” Ask the residents locked into an anti-competition OpenBand contract. If there is a transportation or  land use pain point in your life, look through the BoS archives for a special exception and a vote. If it hurts you, it probably helped Eugene and one or more of his donors.

But that isn’t the worst of it. The dozen volunteers who worked the embarrassing LCRC meeting, the 30 volunteers who worked the Sterling Job Fair, the “stand-by Eugene” inner circle, the Republican 33rd House District candidate who adorned his baby in pro-Eugene regalia, they love to be victims, too, and they are very attached and sentimental about their sacred victim identity. 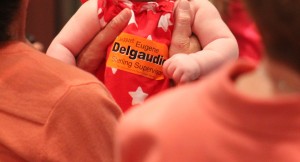 Kristen Kalina, whom I always considered a “moderate” supported Eugene, voting for the LCRC resolution. She explained: ‘I emailed the BoS that “Eugene should have the chance to “give his piece“, and I can’t vote no, not after that.’

His fellow “victims” don’t know what their “firewall” stands for. They all play the part of Klaus Mann’s Mephiso, living out their political dreams. Like Kristen, they get lost in a legal fog of self-indulgence, and forget that their “firewall” is against other people, real people. The so-called “liberals” aren’t “activists” or “radicals” or “threats” that need to be “protected” against. They are citizens. Eugene can only “advocate” by twisting them into sub-humans. That’s his “art,” and it’s a moral red line that should never be crossed. If the foundation of your political career is  name calling, defamation, and feigned “victimization”, you need to find a new vocation. Enough! Basta!