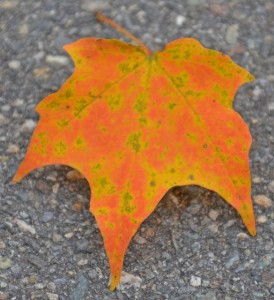 When a tree is fully clothed with these leaves seen in sunny stark contrast with spectral shifts of red and yellow leaves as well as lingering greens from other deciduous trees, this natural palette is so brilliant we can’t help ourselves, we seek it out, travel along tree-lined roads, sit on our back porches, looking and watching, to celebrate this recurring spectacle of nature.

We watch when the transformed leaves lose their hold, as daylight grows briefer, and the leaves’ chlorophyll recedes, unmasking their strikingly bright pigments, and the leaves fly float fall in downward angled paths to rest as a fixed quilt covering our lawns, roads and the forest floor.

John Keats called this time of year a time of “mellow fruitfulness.”

I’ve had an opportunity traveling through the upper latitudes in New England this past week to get an early preview of what’s coming our way.

You have to ask how man can be so enthusiastic about the beauty of trees while so indifferent to their care and preservation.

George Perkins Marsh, of Woodstock, Vermont, born on the ides of March 1801, noticed as a young man what it meant when land was de-forested, to sell the felled timber as lumber, to burn the logs to make ash (potash), and to level forests to make grazing pastures for the myriad flocks of Merino sheep that populated his home state.

This caused the waters to flow across the lands erratically, and to carry off the top soil, undermining the soil’s fertility and the agriculture that depended on the soil.  The destruction of watersheds with their entangling web of roots couldn’t hold the rain that fell from the heavens.  This made floods and, ironically, droughts and dry springs as well, what you have when there’s nothing to retain the flowing waters.  Silt ran off the land into lakes and rivers compromising and destroying fish, clogging their gills, decreasing their resistance to disease, impairing the ability of trout and bass to feed upon what they can’t see.

Marsh was a man so well read he almost lost his eye sight reading and, unlike many, he could remember virtually everything he ever read; but he walked the woods to occupy himself when he couldn’t safely read.

Over his lifetime, he studied other civilizations and concluded that they had failed because they abused the natural environment on which their own prosperity depended.

One factor above all that concerned him was how earlier civilizations cut their woodlands too aggressively, bringing down on them great misfortune such as he’d experienced in his home state.

He concluded in his book, “Man and Nature,” that “Man … is to be regarded as essentially a destructive power.” 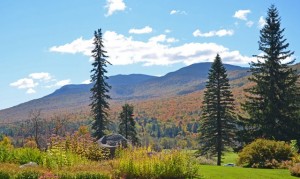 Our national forests arise out of the view that our woodlands are important for us to conserve and protect.  But despite this sentiment, we don’t do enough, as we continue to clear to develop like we’ve learned nothing at all.  In fact, each year worldwide, we clear an area of trees as large as the nation-state of Greece.

We prove Marsh right that man is a “destructive power” that must be controlled and restrained.

Too many refuse to recognize our interdependence with and upon nature.

Too many protest that man dominates nature and not the other way around but, as Marsh observed, “man cannot at his pleasure command the rain and the sunshine, the wind and frost and snow.”

What man can do when he acknowledges the destruction he’s caused is be responsible to restore what he destroyed.

Trees are the source of life-giving air and all our talk about the legacy we wish to leave our children is so much blather if we are not protecting our trees and the water sheds that sustain them.

Anyhow, it’s something we might think about when we watch the colors change this year – that this is a nature show we don’t want to close.