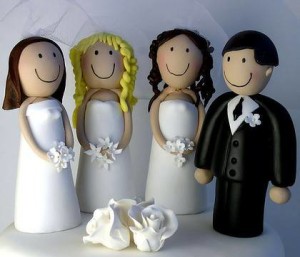 So anyway, the ruling has no impact on how marriage is defined in Utah law. Unless the AFA has done a sudden about-face and no longer means “the legal status conferred by a state” when they refer to “marriage,” this case isn’t about marriage at all. It’s about limits on Big Government regulating the private lives and speech of individuals.

Because the AFA did get one thing right: It’s true that the Utah anti-polygamy law is the “strongest in the nation” in that it includes a provision unique to Utah. The law not only prohibits an individual from entering into a legal marriage with more than one other person, it also regulates with whom that individual can live and consider him- or herself married. More specifically, as Eugene Volokh points out “(w)hat triggers criminal punishment is saying something to the world — ‘we’re married,’ including ‘we’re married in the eyes of God’ or ‘we’re married in our own eyes,’ even when it’s clear to all that the marriage is not legally recognized. It is a restriction on speech, including a particular ritual that is usually a religious ritual.”

It is that unique provision that has been overturned. Judge Waddoups has ruled that such statist interference with individual liberty is impermissible under the U.S. Constitution. What I would like to know is what kind of “conservative” actually thinks that government should be able to control what religious rituals we practice, and what we’re allowed to say about the members of our households? Isn’t that something that people should be deciding for themselves in a free society?

Apparently, the AFA’s answer is no. Likewise, Family “Research” Council spokesman Tony Perkins is outraged that Judge Waddoups “struck down Utah’s criminal ban on ‘plural marriages’,” and Family Talk’s James Dobson is bereft at having to report that the judge “struck down Utah’s laws against polygamy.” In fact, not a single one of the leading allegedly “conservative” groups correctly reports that the only thing “struck down” was Utah’s unique provision restricting freedom of speech, and that the actual ban on plural marriage is as robust as ever. That’s an ironic omission coming from the same folks who claim to fear pastors will be thrown in prison for “preaching from the Bible.” Again, I can’t believe the misrepresentation is due to their not bothering to read the opinion.

The position of AFA, FRC, Dobson and the others seems to be that plural marriage is only really prohibited when individuals can be prosecuted for even expressing the belief that they are married, before God and/or their community. And since they are anything but shy about telling everyone that plural marriage and marriage between spouses of the same gender are equivalent in their analysis, I can only conclude that the goal of their anti-marriage equality activity is ultimately to criminalize my speech when I refer to my husband as my husband. They actually would like to see me subject to prosecution for my speech.

I know that not every individual who opposes marriage equality is a bigot – we not too long ago had a conversation with a local activist who reached out by asking whether someone can “actively oppose homosexuality [sic] and not be a ‘hater'” – and I would think that a good many of them would be taken aback to see where the position of these anti-gay advocacy groups logically ends up. It’s not a place that any rational person could consider part of America.

1 thought on “Another day, another painfully dumb lie”