What exposes both men is their utterly clueless focus on a word, when the issue is really the idea they were trying to express. With Martin, his derisive response to being called out for sarcastically referring to a pregnant woman as a “host” only underscores the offensive meaning he intended to convey. By insisting, with all sincerity, that people read “the entirety” of his post in order to understand the context, he is actually making things worse. When they do so, they read this (exactly as presented by one of his supporters):

I received a Valentines Card today with a two tone red heart on the front above the words, “Don’t break our hearts.” Inside was the following message:

“On behalf of women’s Heath advocates across Virginia, we are disappointed in your record of voting to restrict access to critical healthcare for women and families. All women deserve access to their full range of reproductive health options – including preventing unintentional pregnancies, raising healthy children, and choosing safe, legal abortion – and your votes only make it more difficult for Virginians to plan and provide for their families. We are watching your actions closely, and hope that you will reconsider your position on this critical issue. Please don’t break our hearts.

~ How very heart warming – all while using ill defined terms. “Raising healthy children” in the context of access to abortions speaks only to the ability to “kill unhealthy children.” Do they not see the sickness of that argument?

If it’s your expectation that I should support such nonsense, I will be breaking your heart.

You can count on me to never get in the way of you “preventing” an unintentional pregnancy.” I’m not actually sure what that means, because if it’s “unintentional” you must have been trying to prevent it. And, I don’t expect to be in the room [n]or will I do anything to prevent you from obtaining a contraceptive. However, once a child does exist in your womb, I’m not going to assume a right to kill it just because the child’s host (some refer to them as mothers) doesn’t want it to remain alive.

We finally get to to the truth at the end of that same line. What they want is access to “safe, legal abortions,” any time one might be desired. Okay, then why did you write all the rest of that bologna about raising healthy children (by killing the unhealthy ones), having access to healthcare (which you do), and preventing unwanted pregnancies (don’t have unprotected sex)?

Such nonsense, supposed adults have written, to celebrate love, on Valentines. These folks are really sick people!

(Senator Martin later edited “host” to “bearer of the child.”)

Martin’s defenders claim that it’s “ludicrous” to infer from this post “that Steve actually believes that mothers are simply hosts for unborn children.”

In fact, changing the term from “host” to “bearer of the child” to “mother” does not change the meaning of his statement one bit: Once a person is pregnant, that person should no longer have authority over the use of her body. It’s not the word “host” that’s offensive, it’s the belief about the civil rights status of the pregnant person. The word “host” just happens to beautifully express that belief. There was no misunderstanding or sensationalization. We understand exactly what he meant, although he does not see anything wrong with what he meant.

Beyond that, Martin’s outraged response to the “valentine” demonstrates his cluelessness about the entire issue. To contemptuously dismiss the fact that a group of female constituents has honestly told him how they are affected by his positions on reproductive health care, including but certainly not limited to abortion, is both disrespectful and cruel. Who is Steve Martin to project on these women what they should feel about reproductive health experiences he neither understands nor could ever possibly experience? To not understand the range and importance of the reproductive, family planning and prenatal health care provided by the clinics he and his allies have targeted for elimination as crucial to “raising healthy children,” instead misunderstanding that phrase as some sort of eugenicist conspiracy? That’s just profound ignorance, and we’ll leave it at that.

Bob Fitzsimmonds has already screwed up by deleting his comment. That’s not how to manage social media. But once again, the word itself is not the problem. The problem is the idea FitzSimmonds was expressing: For Republican women to be losing patience with sexism within their party represents “sexist [twaddle].” Believe it or not, there are some men who are so attached to the idea of rigid gender roles throughout society that they do harbor the belief that only males should properly hold public office. I don’t see how anyone could seriously deny that fact, and I also don’t think that belittling Republican women who call attention to it is a very smart approach.

And if there were any remaining doubt about what women, even women who are dedicated to conservative political causes, are frequently subjected to online, here is an example from last night, in case it too disappears. “Heather” is the woman to whom FitzSimmonds was responding. 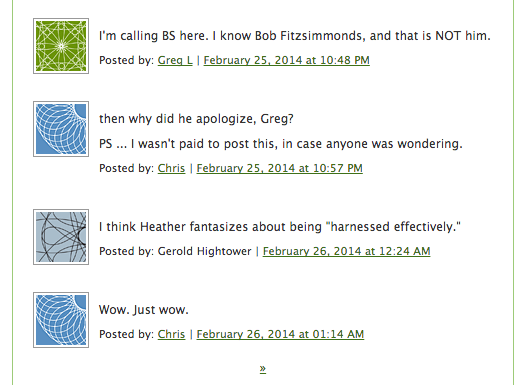