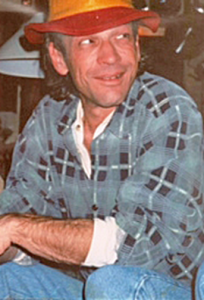 We don’t always appreciate the filaments of family and friends that favor us in life.  We may not assess the significance of our connectedness, what we truly mean to each other, even when we finally lose one of our family to death.  There are so many insignificant distractions from what really matters in life.  But no one missed what mattered about Paul Huber.

Paul was born on October 4, 1951 and a few minutes later, his Mom, Carolyn, gave birth to his twin brother, David.

Paul and David were not identical twins, nor were they rivals, nor was Paul or David into being known as “a twin.”  “I’m my own person,” Paul said. David said, “He was the cool guy.  I was the nerd.”

Roberta, the middle child, said, Paul learned to play “his first electric guitar” as a kid when Dad took the family to Tokyo for work, in the 60s, living there for three years, while Dad was an editor for the Stars and Stripes.

The family moved to the country, to Loudoun County, when Dad said, “I want some fresh air and peace and quiet.”

When the twins “growed” and lived in Lovettsville, it was a small cabin off Georges Mill Road, near the pond that the Game Protective Association now maintains.  Herb Jennings, who worked with Paul said, “Beans freezed inside that cabin.  They put them in the fire, and they still were freezed.”

Given his ability at building and drafting, Paul drafted, designed and built homes; he was a builder.

One of his patrons, who asked not to be identified, said, “Paul would produce a free-hand sketch like you’d expect from an architect, then he’d bring that two-dimensional sketch to life with labor and materials.”

Herb Jennings said, “I worked for Paul for 14 years building homes, additions, whatever he needed done.  When he wasn’t working, he was often playing all sorts of music.”

“He played the guitar and mostly the mandolin,” said Bob Regimbal, “We called our band, the ‘Dirt Poor Boys,’ and we played everything we knew all the words to.”

In his 60s, Paul was having real problem breathing, was injured on the job, his arm wasn’t of much use, and the doctors just couldn’t make up their mind what else might be wrong with Paul.

Herb said, “He asked me to move in with him.  He was dying.”  Herb was married with children, but he did so for his friend, the man he worked with, because of the tie that binds friends like family and connects gently, even if inconveniently.

“He’d fall asleep while driving,” said Herb, “so I’d drive Paul. When we went for a test, he repeatedly stopped breathing.  Our last night, I got him a cup of coffee after he couldn’t breathe and later I found him, his arm outstretched, not breathing.”

In memory, the family gathered by a river, on a rainy afternoon, in early September, and huddled, standing in small tents, shuttling back and forth between them, sharing recollections of Paul – remembering the acts and words that defined his life and what finally brought him down, what connected them, one to another, the filaments, invisible, yet strong as iron, and how they helped each other, in those final painful days and how they’re there for each other now.