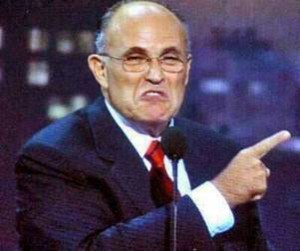 Rude Rudy Giuliani, the former Mayor of New York, and unsuccessful Republican Presidential nominee, says President Obama doesn’t “love” America, and then he said his remarks are not racist because Obama had a white mother.   Sounds crazy – and it is – but it’s also true.

Rudy was hosting a reception at the formerly chic mid-town NY watering hole, “the 21 Club,” on West 52nd Street, for Governor Scott Walker – so the Governor could find some open checkbooks for his nascent presidential campaign.

That fund-raising reception may have also been calculated to position Rudy for a cabinet post should Republican Governor Walker win the 2016 Presidential sweepstakes.

But Rudy’s gotta hate and, seemingly, no one more than President Obama.

At this “private” gathering, Rudy said, “I do not believe that the President loves America.”  Rudy also said, “I know this is a horrible thing to say.”  Then, why did you say it Rudy?  Because it was “private.”  You’d think he would have learned something from “the Mitt.”

Rudy later unwisely added that his remarks about Obama’s upbringing should not be considered racist because the president was raised by “a white mother.”

It sounds like something a comic like Jon Stewart would make up.  But no, it’s true.  Rudy really said that.

Rudy is an understudy for the miserable and mythic Tantalus, his “precious” just out of reach, whether he stretches upward or stoops, and it’s because Obama got the job Rudy wanted – and Obama did it twice.

The only thing Rudy loves is the Yankees – and you gotta wonder if that’s not an act as well.

I suspect that Rudy wasn’t listening when Obama said the following:

“I am the son of a black man from Kenya and a white woman from Kansas.

I was raised with the help of a white grandfather who survived a Depression to serve in Patton’s Army during World War II and a white grandmother who worked on a bomber assembly line at Fort Leavenworth while he was overseas.

I’ve gone to some of the best schools in America and lived in one of the world’s poorest nations.

I am married to a black American who carries within her the blood of slaves and slave-owners—an inheritance we pass on to our two precious daughters.

I have brothers, sisters, nieces, nephews, uncles and cousins, of every race and every hue, scattered across three continents, and for as long as I live,

I will never forget that in no other country on Earth is my story even possible.”

How does one contemplate the author of such sentiments – and conclude the man, our President, Barack Obama, hates America.

If JFK had to assure America that his religion was something separate and apart from service to America, did Obama have to assure America, or at least Rudy, that he bore no grudges for this nation’s reluctance to end slavery and to contain racial discrimination – even now?

Rudy ironically fits a virulent and toxic strain in American history, of paranoia, attacking immigrants and scapegoating various groups, in one iteration known as the “know nothings,” to divert the public’s attention from what’s really the matter – and that must be addressed with care and deliberation.

Or Perhaps Rudy only hates Obama.