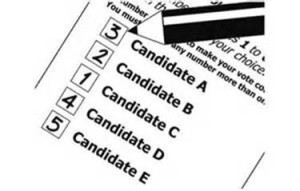 How does a voter game the choices, four seeking the Chair, three wanting to be Sheriff, and select the persons in the races most representative of what Loudoun needs?

For some, it may be making the calculation that their first choice can’t make it to the finish line and win.

There is a better way. In High School, I found voting stratagems mathematically fascinating, because how you count votes, corruption aside, determines how representative the outcome.

I worked for Dr. George Hallett, with a Math Masters degree from Harvard, and an authority on election reform at New York’s Citizens Union, who worked tirelessly for proportional representation and preferential voting.

Preferential voting works like this. A voter ranks his choices for office, first to last. The voter selects his most preferred candidate, perhaps the Independent in the race, and, if that Independent candidate gets the lowest vote and is eliminated, the voter’s next preference, originally entered when voting, is “transferred” from the losing candidate to the tally for the voter’s second recorded choice, and so on, for all voters in that election, until there are two candidates standing, and one the preferred candidate.

This system is a cure for votes “wasted” on those who lose badly in the general election.

But we don’t have that system this election cycle, so voters must decide where their vote can do the most good, and realize they only have one choice to mold the electoral outcome to their liking.

After this election, however, we need to get serious about preferential voting.

This is a good time, therefore, to ask the current crop of candidates if they’ll work for preferential voting, in Loudoun and in the Commonwealth, if they are elected.