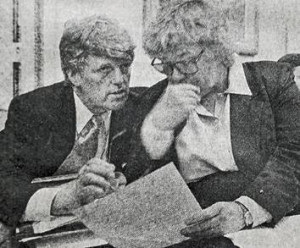 Our elected “leaders” cower before the “new” NRA, a cultish front group for the firearms industry leaders who sit on its Board and who help fund the organization. Politicians fear that they will lose the approaching election without the NRA’s political support if they dare to think to say or do anything that might control gun violence in America.

Of course, if you remove the gun, from any possible confrontation, you significantly reduce the likelihood of death and injury. There are no drive-by knifings. Fist fights don’t usually end in death. Clubbing someone may not result in death. No alternative means of violence kills and injures others in the numbers and in so brief a time – as with a gun.

Some insist they need an “assault” weapon for “self-defense.” According to studies by David Hemenway, of the Harvard Injury Control Research Center, however, most “self-defense” gun uses occur in escalating arguments, are used more often to intimidate than to defend anyone, that the gun in the home is used more often to intimidate intimates than to thwart crime, and, here’s the kicker, few criminals ever get shot by “decent law-abiding citizens.”

The right to bear arms was never meant to be a private right anyhow.

In the Declaration of Independence, the “founders” deplored the fact that the King had “kept among us, in times of peace, standing armies, without the consent of our legislatures.”

In reaction to Shays’ rebellion, Massachusetts formed a militia to put down the rebellion.

We didn’t trust “standing armies,” but we did trust homegrown “militias.”

The 2nd and 3rd amendments to our Constitution, are the “Military Amendments,” with the 3rd against quartering troops, and the 2nd providing a “collective” reason for gun ownership, in order to sustain “a well-regulated militia, being necessary to the security of a free State.” The National Defense Act of 1916 supplanted the need for a militia with the National Guard.

What’s the answer? Simple! Enough is enough! Ban all the guns – with few exceptions – if any.

Amend the Constitution if that’s what we have to do to reverse the Supreme Court’s recent interpretation that the right is “private” instead of, as originally contemplated, “collective.”

Our society requires a paradigm shift away from the notion that we can’t do anything about this. We can and we must.

Plainly, we can’t trust citizens to do the right thing.

So let’s outlaw what our citizens aren’t responsible to handle safely, namely, the guns.

Make those who want guns to persuade us in legislative chambers that any exception is right and necessary, rather than the other way around.

Who would risk any life, trusting personal safety to anyone with a gun, given what we know? Not I! So let’s change the law. That’s a fitting tribute to Allison and Adam and all those students, teachers, and children killed by gun fire.