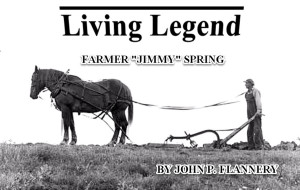 Another example of why Western Loudoun is worth preserving and maintaining is the kind of farming folk that made this County.

Perhaps more people need to understand and consider what kind of people made Western Loudoun what it is, and why it must be preserved because what’s best about the West is a lot more than geography.

It’s about core values that sustain a community when the center doesn’t appear to hold any longer.

Jimmy likes to tell stories, but this story I’m telling is about “Jimmy.”

It’s about Jimmy’s values, the ones we treasure as a community, that we celebrate, seek to emulate, because these values he shares give us a place to stand and enable us to achieve a worthy objective, whether it’s farming or anything else we might consider worthwhile.

Aristotle said, “Nothing improves your aim like having a target.”

Jimmy had a target, and a way to reach it, because he had the character transparent to everyone else, revealing exactly who he was, and what he was made of.

His force of character defines his life, as a living legend, and it’s particularly instructive for all of us to consider this man in our time of fact-free discourse of a seemingly rudderless and unworthy cast.

This past Sunday at about 3PM, at the local Lovettsville Lutheran Church in the basement, a crowd of 120 came to hear Jimmy’s story, and to watch a movie prepared by yours truly that expands upon the remarks I’m making here (the movie was posted on line after its premier at the award ceremony – and it’s free – https://vimeo.com/195151504 ). 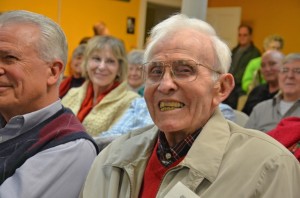 Jimmy’s story begins when he decided to follow his Dad into farming.

Jimmy got his break in the depression years when he had barely enough to live on to borrow to make a living.  He had to rely on the only collateral he had, his character.

A man who well appreciated what kind of young man Jimmy was, and would become, vouched for him to get a loan to get started, when Jimmy was barely sustaining himself and his young wife.  One friend said, “He’s like Washington, he never told a lie.”

When Jimmy started farming, there was back-breaking work for long hours, from the early morning hours, often in the dark, starting in the lean years of his youth with several horses pulling and this solitary man leaning into the dirt and rock and Virginia red clay against a plow.

Jimmy found prominence in a Loudoun County community that farmed and still does, starting with so few resources to farm, but Jimmy had strength, energy, know-how and personal resolve.  There were no short cuts for Jimmy.  Ultimately, he was working larger and larger fields to produce crops and grazing livestock on thousands of acres including the Godfrey Farm and the Firestone Farm and others.

He met his love, Zella, at a square dance, thought she liked his dance, liked her well enough, then decided he loved her, married her, and they farmed, and she focused on the poultry.

They made a family together, had two children and five grandchildren, and shared 70 years of marriage until he lost her this past June.

Jimmy says somewhat solemnly that he thinks only about the good times with Zella; that’s the only thing you can do he says.

Jimmy farmed not in the way that many others may, struggling and fighting with Mother Nature; rather, Jimmy conformed with nature, sought a harmony with the soil and livestock that allowed him to enjoy farming.

Jimmy knew how fragile and unpredictable was the seasonal economic life of a farmer, and he pressed on through the setbacks because, as Jimmy says, that’s what he knew.

In Jimmy’s long life, he’s gone from working a horse drawn plow to witnessing the first men walk on the moon.

This is the kind of man that comes out of the land, honest, hardworking, truth telling, knowing what the land can give and taking no more.

This is the kind of man that Thomas Jefferson claimed came from a life in agriculture, working on the land, being with the land.

This is what Western Loudoun is really all about – at its best.

The sloping hills are a pleasure to behold but there’s a lot of character in them thar hills in the people that live in these lands, and a lot to learn for those who visit this special place.