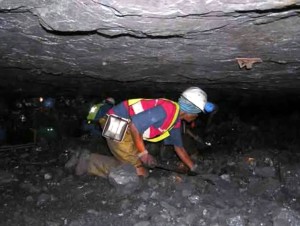 Coal miners crawl in mines no taller than a table top

The standard of civilization is how we treat our own.

By that standard, we are increasingly uncivilized.

We can track our decline in our national disregard for human rights, in our xenophobia, the cry to build walls, our inclination to war, to betray nation states who have long been our allies, and our indifference to the plight of the living young, the disabled, the poor, the ill and the aged.

We stand ready to betray the trust to preserve and protect natural resources, historic monuments, and public lands.

Let us choose one group of workers, hard done by the false political myths we tell, and repeat, who are at a focal point, in national discussions about energy, safety and health care.

The question is a little like asking, “How did our forebears feel when farriers were put out of work because more and more the model T replaced the thoroughbred horse?”

Nor is there any way we can close the door to renewables.

If anyone thinks renewables are a fad, then they’re a fad like the internet.

We should be asking instead, how we can help these miners?

Many of our leaders say, “We’re bringing mining back.”

This is a sop to the uninformed who want to believe such nonsense.

There’s no more “easy coal” to mine.  Coal fired plants cost more to run.  Natural gas is replacing coal.  So are the renewables I mentioned.

Millions are holding their collective breath hoping that they won’t be denied the medical care that makes their life livable and possible.

Can you imagine what a miner thinks who earns little, suffers physically from his years of mining, and has an ever-fixed fear how he’ll suffer and die without adequate health care.

I sat with Lance Hill, a bear of a man, and a geologist, who talks about coal in its various forms but he’s talking as a geologist, not a miner.

“My dad was a small strong wiry man,” said Lance, “and he was a Virginia coal miner.”

“My Dad crawled in mines, hand over hand,” said Lance, “in cavities no taller than this table top, working underground in this way for years.  He breathed deep the black dust in the coal mines.”

That’s the story of the legions of miners not just Lance’s Dad.

Lance’s Dad’s hard life caught up with him – as it does for every miner.  He suffered from black lung (pneumoconiosis).  His strength shrunk in the work of the mines.  His strong back grew weak.

So much for the myth of the coal faced miner.

There’s little romance in a broken man’s life of toil when he’s no longer able to “serve.”

The mining companies care only about their bottom line.

They care little about a miner’s health.

Don Blankenship, former Chief Exec. of Massey Energy Co, cared so little about the miners’ health and safety, he ignored the gas level buildup, and 29 miners were killed in the Upper Big Branch Mine.

But what about the health of a miner when he limps from the mines?

The nation has before it a proposal to cut the Medicaid that many miners count on to stay alive.

Senator Joe Manchin (D-WV) complained that the Republican Healthcare bill “needs more soul.”  He got that right.  Senator Manchin is talking about the “severe cuts to Medicaid” and “raise[d] costs for seniors.”

When asking what we are going to do for miners and so many of our friends and neighbors, the answer must be that we are going to assure that they have health care, assure the availability of Medicaid, also access to medical insurance, pensions, and social security.

If anyone asks why, well it’s because that’s how we measure civilization, how we treat our own.