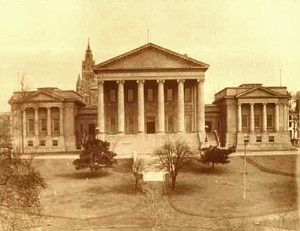 Presiding over Virginia’s constitutional convention in 1902, John Goode said that the 15th amendment, providing for African American suffrage, was “a stupendous blunder” and “a crime against civilization and Christianity.”

The Virginia convention delegates created their Constitution without allowing a public to ratify it, denying the vote to blacks and providing for a poll tax.

The dead hand of the KKK, Jim Crow laws, and massive resistance against integration, fully supported by our General Assembly, lives on, even today, with amendments that perpetuate this distasteful legislative relic.

The 13th Amendment to the U.S. Constitution, in Section 1, commanded that “[n]either slavery or involuntary servitude … shall exist within the United States.”

In Jones v. Alfred H. Mayer Co., in 1968, the Supreme Court explained this was not only about stopping slavery, it was also about “abolish[ing] … all badges and incidents of slavery in the United States.”

This suspect statute protecting confederate values contravenes the intent and purpose of those constitutional amendments passed in the sunset of the civil war. State statutes must fall when they contradict the constitution.

It serves us poorly to have a legal opinion, even “advisory,” that memorializes without criticism a statute that is at least unconstitutional by its original intent and as applied.

Let us resolve to take down that statue in Leesburg, and let someone sue the county, if that’s what it takes, so we may litigate the unworthy origin of this statute. Or perhaps we should encourage those aggrieved parties to take the matter to court.

In any case, let us stop pretending that this statute is constitutional, or legally respectable, by its origin.

We are good in Virginia at finding ways to avoid doing what’s right.

This legislation is wrong and pretending otherwise makes us complicit in its original ill-conceived intent.