Kevin Delandtsheer, when 6 years of age, lived around the corner from the Dutch Sint Baf Gothic Cathedral, named after Saint Bavo, consecrated 942, in Ghent, Belgium.

Kevin said, “In that church is the ‘Mystic Lamb’ by Jan vanEyck.”  This work is considered one of the most important works of the early Northern Renaissance, and one of the greatest masterpieces in all of Belgium.

But Kevin’s early love of art didn’t come from that masterpiece, nor an art class at school, at Sint Amandus.

“It came from my parents  My Dad started as a farmer, but then he made tools, when I was at a young age,” said Kevin, “and my Mom pushed him to go ‘commercial’ and he took the heat and strength and tools he had to form the metal to shape artful chandeliers, and my Mom formed glass lights, not like others I’d seen, and this familial partnership was my education in the arts.  I remember this huge 12 foot chandelier they made.” 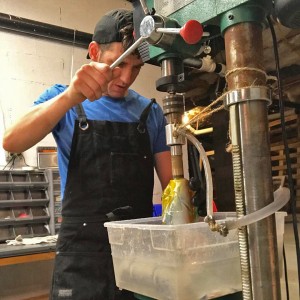 “It was when I was six, I fell in love with all things America,” said Kevin, “and it was because my Mom came here for six months and came back with stories about America.  I didn’t know how but I knew somehow I would come to the States.”

“I learned the elements of this art of making chandeliers,” said Kevin, “time, temperature and gravity are the keys.  But the real trade secret is in the ‘frit,’ small particles of glass, powder, totally different than other techniques, to color the glass and the lights, a flemish approach.” 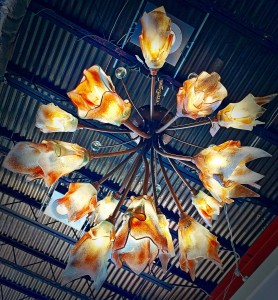 An exemplar of Kevin’s work

“In April 2007, I was invited by musicians to come to Chicago,” said Kevin, “I had made the most wonderful chandelier, a special, with musical instruments in the design, like the glasses I made to light the ‘Delirium’ chandelier.”

“They had an experimental form of music, ‘Meletrom,’ from England,” said Kevin, “and I helped set up gigs for them in Belgium.  My art caught on, and I made chandeliers for six upscale McDonalds, one in an old-building in the center of Belgium and in Holland.”

“One trip I made to Chicago, I met Elizabeth, she was there because of her sister, up from Purcellville, Virginia,” said Kevin, “and I asked, ‘Who is that girl?,’ and you have to understand I had long hair, a long beard and a long coat.  It may have tested her attraction.  It took a while to win her heart.  We have different ‘gifts,’ as Elizabeth is a financial analyst, and I am not.”

“I came here several years ago for Elizabeth,” said Kevin, “and we have two wonderful children, a girl, Hastings, and Jax, a boy.  America has been a dream come true.  It truly is the land of opportunity, and some may not think so, but as compared to Belgium, it has been cheaper to run a business.”

“I set up this gallery in Leesburg because I thought this Town is an exciting town, with even greater possibilities,” said Kevin, “and I’ve found patrons who like the chandeliers we create, as well as the sculpture and the paintings we present in the Gallery.” 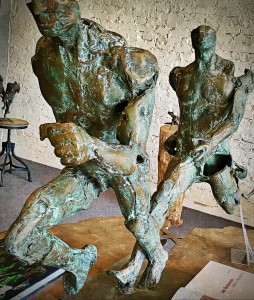 The artist, Budi Ubrux, has his works in the Jakarta Museum, the most powerful paintings, “and we have a great example of his work in our gallery.  I wrote him a text but, in his time, I will hear.” 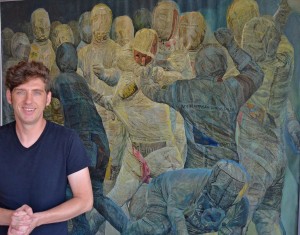 Kevin and his most recent contribution by Budi Ubrux

Kevin then moved on to speak to a visitor to his gallery (www.delandtsheerart.com), long a long way away from the Ghent Cathedral.