Mike didn’t expect he’d become a combatant in a debate to preserve what he found.

At the birth of the nation, Thomas Jefferson posed a fundamental question, “Whether one generation of men has a right to bind another.”

Jefferson answered, in the case of the earth beneath our feet, “that the earth belongs in usufruct to the living…”

“Usufruct” is the lawful right to use or enjoy the thing possessed, the earth, without altering it, to maintain, preserve and protect it, passing it on to one’s living successors in the same condition as it was found.

Mike took this approach to heart.

Mike and his wife, Sian, bought their home in Western Loudoun with a lawn out front of the house.  They’ve maintained the lawn as they found it.

There was also a meadow at the back of the house, out of sight, encircled by trees and they found that had been there at least 28 years, going back to when Mr. Conrad Vena owned the land.  They thought to keep that as they found it as well.

A panoramic view of “the Meadow.”

“When I walk out of my home office in the lower level, where I tele-work on Telecom, I see deer, fox, and friendly black snakes.  In the Meadow, there are beetles, butterflies, and moths.  And so many birds – blue jays, blue birds, cardinals, yellow gold finches, and a hawk in that tree over there.  We have natural music.  We have Persimmon trees and a Walnut tree.  There are inter-related layers of life in this meadow that sustain each other.” A pair of deer in Mike and Sian’s meadow (courtesy)

Mike learned you can lose more than natural beauty when you lose a meadow, you also lose the pollinators, the Monarch Butterflies, who crave milkweed, and make possible the fruits and vegetables we eat that are insect pollinated.

“We have abundant milkweed in our meadow, food for the Monarchs,” Mike said, “that’s why we became a Monarch waystation.” 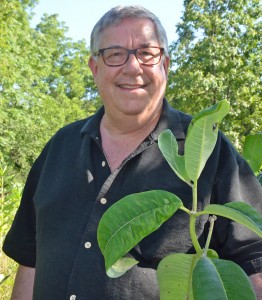 Mike and some milkweed

Monarch Butterflies are at risk, Mike learned, because the milkweed where the butterflies eat and lay their eggs, are being cut back, compromised by pesticides and herbicides, by increased development, and extremes in climate, ranging from storms to heat and drought.

Mike also learned something he considered “truly amazing” about the migratory path of Monarchs, that they travel from Canada to the United States to Central Mexico and back again, exhausting the lives of five or more generations of butterflies.

The Monarchs live about a month, meaning they must pass on the knowledge of the circular route they travel, perhaps stored in their DNA.

Mike said, “I’m fascinated how this is accomplished, by these multiple iterations.”

Sian showed several examples of the resultant eggs on leaves and the emerging caterpillars before they transform into butterflies. 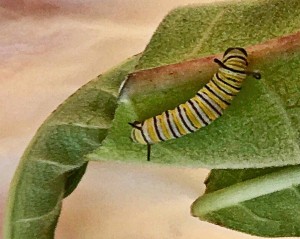 “We have an HOA, however,” Mike said, “and they want us to mow down the meadow.”

“We tried to work it out,” said Mike, “but couldn’t agree, and we’re going to be in court to see what the law thinks about this.”

Sian said, “In the meantime, we have been heartened by elementary school children who have written notes of support for our meadow.  One student wrote to the local HOA, ‘how would you feel if someone mow[ed] down your home,’ referring to the flora and fauna that inhabit our meadow.  Another young child wrote that this meadow, why, ‘it’s been there my whole life!’”

The Meadow has existed at least for 28 years, so it existed somewhat before this young man was born.

The question is, will the young man be able to say the Meadow has been here his whole life when he is an adult? 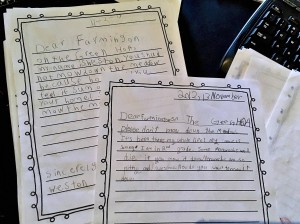