The name, “the year of the woman,” hearkens back to another election, 1992, when several female Senators were elected.

What is not often mentioned is that year, 1992, saw the confirmation hearings for Supreme Court nominee Clarence Thomas, heated up by the allegations of Anita Hill against Thomas, that many believe made it the year of the woman.

Neither of the two female Senators then serving in Congress, Nancy Kassebaum of Kansas nor Barbara Mikulski of Maryland were on the Judiciary Committee when Anita Hill was grilled.

It’s almost eerie that Kristin began to organize Lovettsville for the mid-term elections, projecting an election year for women, before the similarities involving another judicial nominee became so obvious, and so divisive.

Five women Senators were elected in 1992 including both Senators from California, and one of those women became the Ranking Member of the Judiciary Committee, Dianne Feinstein.

Before the contentious confirmation fight over Mr. Trump’s nominee for the Supreme Court, Judge Brett Kavanaugh, there were 256 women on track to be qualified for the November ballot in House or Senate races — 197 Democrats and 59 Republican candidates.

There are 234 women running for the House and 22 for the Senate.

Based on these stats, this is plainly another “year of the woman.”

Kristin and a phalanx of Lovettsville women mostly, and some men, are putting all their organizing energy into electing State Senator Jennifer Wexton, and ousting incumbent Rep. Barbara Comstock, by organizing the Town and the surrounding area like has not been seen in political memory.

On a recent Sunday, Kristin filled her kitchen and living room with door-knocking, post card writing volunteers, and there is no comparable political operation past or present but hers in Lovettsville. 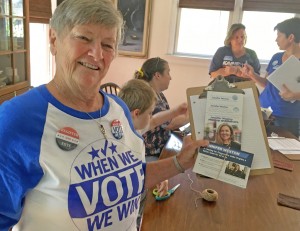 Ruth Crocker said, “I got politically active the day after Mr. Trump won.  I had never knocked on doors before.  I will never not be active again.  I’ve seen the consequences.  If a person does nothing else, if they don’t knock on doors, they should get out and vote.  After all, people have died so we could vote.” 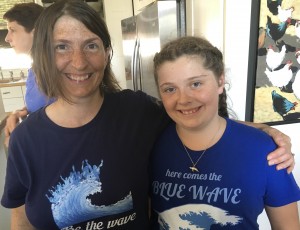 Valerie, 10, came to Kristin’s with her Mom, Sarah Greenleaf, who said, “We are very motivated to work in this election, to get out canvassing.”

Kristin said, “This is to save our country, and it doesn’t end on November 6.  I’m going to be doing this every Sunday from now on.”