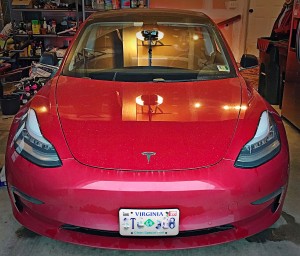 You plug your car into your house outlet but the source of energy is, to choose one regional example, a West Virginia fossil fuel source – coal.

The electric car runs eerily silent, that’s electricity for you, without generating any toxic carbon emissions, as you idle behind the Tesla sports sedan, but, and this is the rub, its carbon footprint has been shifted across the region to the generating source – a kind of fossil fuel shadow.

Lovettsville’s Stephen and Annee Olden have one approach.

They have a home with an array of solar cells on their roof – so when they plug in their Tesla Mod 3, it draws upon the sun’s rays.

“There are ‘supercharger’ outlets all over the place,” said Stephen, “and the car seeks them out.  It can take about 20 minutes to charge up completely.  In California, drivers can trade out batteries, and they have lifetime warranties so there’s no downside on trading batteries.  But that’s not how it’s done out East where we are.” 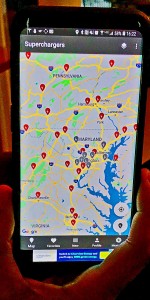 A map of nearby superchargers for the Tesla

“I wanted this car,” said Stephen, “first because it is good for the planet, but also because I’m somewhat of a sports car fanatic and this car’s internal combustion torque is immediately available and so a Porsche or Ferrari can’t compete.  Really!”

On-line sources agree that the car’s dual motors are enough to make the vehicle a fierce competitor in quarter-mile races, and even more so in 1/8-mile runs. The cars’ motors produce a combined 450 hp and 471 lb-ft of instant torque.

What that means is that this sedan can propel itself from 0-60 mph in just 3.3 seconds 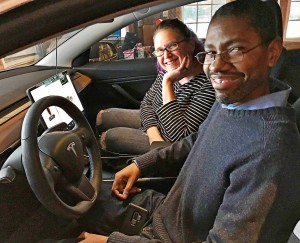 Annee and Stephen Olden in their solar sports car

If you want to see any analytics about the status of charging the car or its consumption while driving, there’s a graph or chart, and the car has cameras to keep you aware of other vehicles and obstacles around the car; it is not automatic driverless but it’s approaching that. 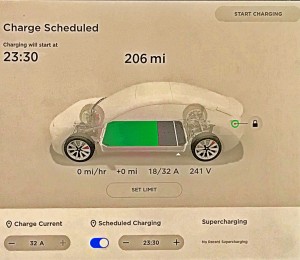 It has an all-glass roof that is fabulous at night; Tesla says it’s of the same weight as two full-grown African elephants.  In other words, it won’t collapse on you.