Our time is “out of joint” and we must very soon “set it right.”

Our leaders, in both parties, act upon this absurd faith, like Adam Smith’s chimerical invisible hand, as if we have a self-executing constitutional framework, and some sort of magic shall cure the excesses of the autocrat in the West Wing – even if we do nothing to enforce the checks and balances, provided for by the founders, now gathering dust and cob webs.

Congress can’t bring itself to do its job – to pass an impeachment resolution to investigate obstruction.

Congress is demanding that the Trump West Wing and Barr cooperate with congressional oversight, respond to subpoenas for documents and witnesses, but the West Wing says “pound sand.”

The Executive Department is telling the Legislative Department that we are not going to help you get any more evidence about how we obstructed the Mueller investigation. 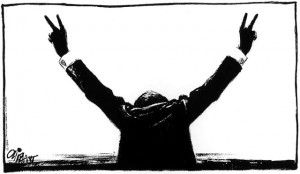 This has happened before.

In the Report on the “Impeachment of Richard M. Nixon, President of the United States, 92nd Congress, 2d Session, Report No. 93-1305, at p. 188, Article III of the charges of impeachment, provided, in relevant part, that President Nixon, “contrary to his oath faithfully to execute the office of President of the United States … has failed without lawful cause or excuse to produce papers and things as directed by duly authorized subpoenas … and willfully disobeyed such subpoenas …”

The Report continues to charge that Mr. Nixon was “substituting his judgement as to what materials were necessary for the [congressional] inquiry, [and] interposed the powers of the presidency against the lawful subpoenas of the House of Representatives, …”

The Report states further, “[i]n all of this, Richard M. Nixon has acted in a manner contrary to his trust as President and subversive of constitutional government, to the great prejudice of the cause of law and justice, and to the manifest injury of the people of the United States.”

There is not a word in this charging article of impeachment against Nixon that is not equally applicable to the misconduct of Mr. Trump, or his corrupt agent, Mr. Barr, in limiting any further disclosure about obstruction.

In these closing hours, when two of the departments of our government are joining the issue, there is word that perhaps, at this late date, Messrs. Trump and Barr may invoke executive privilege in support of their refusal to cooperate with the congress.

Mr. Trump on advice of counsel waived executive privilege and authorized staff and even White House counsel to cooperate with Mr. Mueller.

You can’t invoke a privilege when you’ve revealed the content of what you belatedly insist is confidential.

You can’t claim a privilege to cloak an ongoing crime.

You can’t invoke executive privilege when you weren’t the executive.

But why are we making our job difficult?

We have enough information to go forward.

Several presidential candidates have agreed – we have enough.

We should have already drafted a resolution to investigate possible impeachment, high crimes and misdemeanors.

We have a series of proposed obstruction charges, and the Administration’s refusal to respect and respond to proper process by the Congress.

The Congress should seek such testimony and documents as may be obtained by consent, or more efficiently litigated in the courts.

But we should not hesitate on what is known, to articulate fairly from the public record, and from the Mueller report, what may rightly and properly be identified as impeachable offenses. 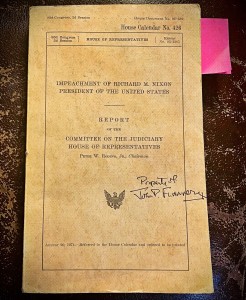