They came in buses and cars on July 9, 2019, the day scheduled for the General Assembly to take action. 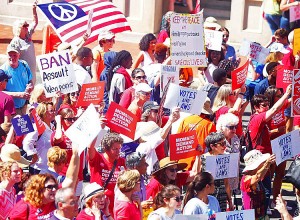 Richmond City Council approved an ordinance days before the special session that would ban weapons on city property and parks.

The proposed ordinance was in response to the mass shooting in Virginia Beach which took place in a city building, as well as the fatal shooting of 9-year old Markiya Dickson, who died after someone opened fire in Carter Jones Park in May 2019.

Smith said it would not completely stop gun violence in city parks, but the chief said when a deadly tool is not available on city property, cooler heads are allowed to prevail in disagreements.

Before the Session convened, Republican Delegate David Larock from Loudoun County signed on as the only House Patron to Senate Bill 4016 which would prohibit localities, including Richmond, from making any laws barring employees from bringing concealed guns to work if they have a concealed carry permit.

The Gun-Free School Zones Act (GFSZA) is an act of the U.S. Congress prohibiting any unauthorized individual from knowingly possessing a loaded or unsecured firearm at a place that the individual knows, or has reasonable cause to believe, is a school zone as defined by 18 U.S.C. § 921(a)(25).

When the Moms arrived in Richmond they were confronted with an array of pro-gun protesters, carrying guns on their hips, long guns on their backs, wearing military cargo pants and camouflage, tactical vests, armored vests, and mirrored aviator shades.

The NRA had taken up office in the conference room of the Republican House Speaker Kirk Cox.

It wasn’t long before the Moms learned that the Republicans with the narrow edge they held in both chambers of the General Assembly voted to close down the special session.

State Senator Dick Black said voting on the gun control legislation would have been “disastrous,” because, he reportedly said, “We don’t have the votes to stop this wave of bills …”

The Moms left Richmond on the busses that brought them and one said, “What we realized is that these guys don’t want to do their jobs.  So fine.  No more jobs for them.”