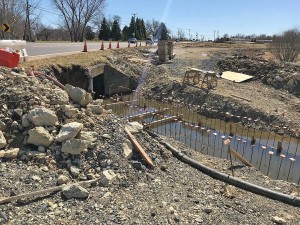 Segment of Walkway – West side of Berlin Turnpike – South of Lovettsville

There have been questions about the extension of Lovettsville’s walking trail into moving waters in a flood plain, and building a walkway in that flood plain and altering the flow and direction of a watercourse.

That’s not to say there aren’t answers.

A flood plain is an area of low-lying ground adjacent to a river, formed mainly of river sediments and subject to flooding.

The trail extending south from Lovettsville has taken a path through a flood plain and running waters. END_OF_DOCUMENT_TOKEN_TO_BE_REPLACED

Sandy Hook Elementary School is one of those tragic incidents that stands out from all the others.  It was a break with past shooting horrors, even including Columbine, and caught the nation’s attention because 20 students and 6 adults were killed in an elementary school class by a gunman armed with a semi-automatic AR-15 assault rifle made by Bushmaster and pistols made by Glock and Sig Sauer.   END_OF_DOCUMENT_TOKEN_TO_BE_REPLACED