I see that Ken Reid continues to charm everyone he meets, already garnering a Turkey of the Year nomination from folks in his own party. Having made the acquaintance of several actual turkeys, both wild and domestic, I confess to having misgivings about the name of this award. Turkeys are often dignified and delightful creatures, while Ken Reid is not. 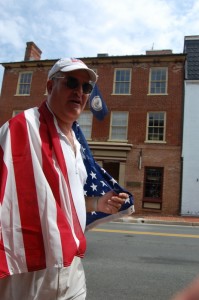 Do not, repeat do not, tell the Boy Scouts about this.

This is a picture of Ken grandstanding at the recent 9/11 ride through downtown Leesburg (the ride turned out to be much less of a disruption than police had predicted; since it was so far behind schedule by the time it reached Leesburg, it passed through town pretty fast.) When I ran into Supervisor Kelly Burk and her husband a short time later, there was really only one question to ask: Why aren’t you striding majestically up and down King St. wrapped in a giant, desecrated American flag?

We had a different question for Ken (actually a series of questions): Why did you run a stop sign and almost hit us as we started to cross the street at Cornwall and Liberty? Were you in a tremendous hurry for some reason? You did see us, didn’t you? Do you think that Town Council members are exempt from the traffic regulations that apply to everyone else?

Ken’s response to our inquiry was to say “sorry,” in a tone that made it perfectly clear that he was not at all sorry.

And now I have two more questions: Is it proper for an elected official to demand the removal of comments reporting on said elected official’s driving behavior from a public forum? How many other times have citizen comments criticizing Ken’s driving or other behavior been removed from public forums because of Ken throwing his weight around? That sounds dangerously close to arrogant abuse of power.

Anyway, the ride was pretty cool. I like this guy: 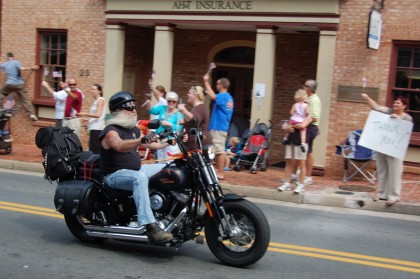 11 thoughts on “Be careful out there, Ken has a large vehicle”