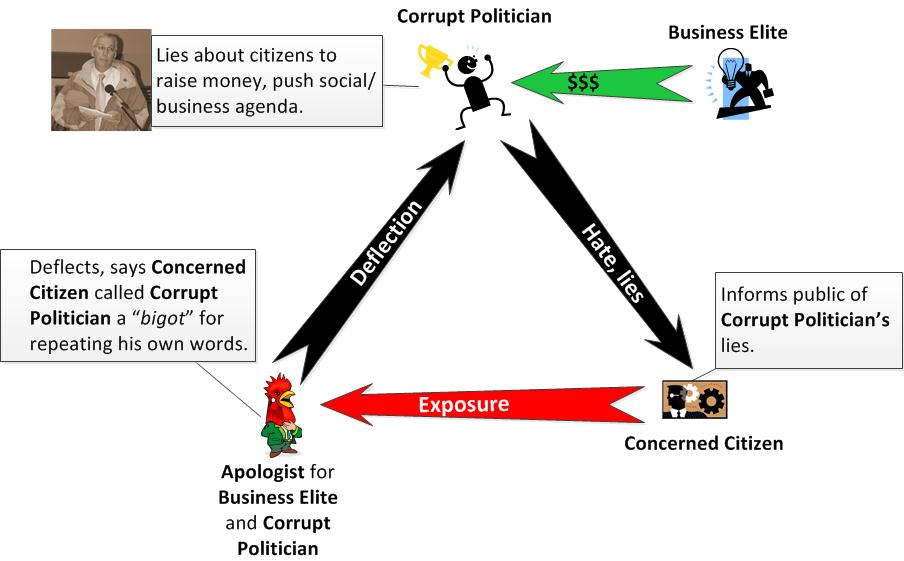 The corrupt politician rarely has to directly address the concerned citizen’s charge, as the apologist polices the citizenry in his or her interest.

So what does this have to do with DAAR?

DAAR is an association of 1100 realtors, and their job is to help local real estate agents sell real estate. The more sales, and the faster the growth, the better – regardless of any other concern. That’s why DAAR opposes restrictions on growth.

“In 2000, DAAR engaged in a long battle with the Loudoun County Board of Supervisors on growth issues. We were on the map, receiving help and being noticed by NAR as an example of what could and needed to be done to fight the slow-growth management trend.”

Although DAAR is primarily an education and advocacy organization, it also has a political action committee. The DAAR RPAC operates as the Business Elite pictured above. The RPAC opposes any restriction on growth, including provisions that do nothing but provide information to homebuyers; for instance, that merely inform the homeowner that they are in a riparian buffer zone or an overlay district. The RPAC, sometimes dramatically represented by apologists, repeats the lies of the corrupt politician. During her public comments regarding the CBPO, apologist Edna Cross seldom restrained her contempt for sol-called “land-grabbers,” “socialists” or “environmental extremists.” And the belligerent “War on Me” tone seems to get the desired result. RPAC legislative victories include:

• Defeated an onerous “warning-style” disclosure on homes within the Limestone Overlay District.

Most importantly, the RPAC funds candidates for local office. Their top recipient is none other than Supervisor Delgaudio. See the DAAR VPAP page. Here’s an excerpt of the VPAP “all years summary”:

I doubt that the funding profile reflects the political preferences of DAAR’s general membership. Most likely, a significant portion is gay-friendly and wouldn’t appreciate that their RPAC regularly helps the political career of a professional bigot. Perhaps that’s why somebody asked the Leesburg Today to delete my comment to the “Arko Takes Over As DAAR Chairman” article. Here is a copy of the deleted comment.

Good luck folks. We’re really going to miss Edna Cross and her anti-communist/anti-environmentalist rants in front of the BoS and her dog-whistle cross-over to speak in favor of Supervisor Delgaudio’s culture war issue of the day.

As you “safe guard and advance the mutual interests of the public, property owners, and real estate professionals,” please survey home buyers and ask if they are happy with the product you sold them. That may truly advance your mission.

The new DAAR leadership would rather keep exposure of their alliance with Supervisor Delgaudio and their utter failure in some instances to represent the public interest in the closet. The water situation at Raspberry Falls is a case in point. It will cost anywhere from $4M to $12M capital and $70K/year to $500K/year maintenance to correct a defect – a defect known to the developer long before approval of the project – that affects fewer than 200 homes. Does anyone think it advanced the interests of the public to fail to disclose the limestone karst formation under the homes? Does it protect the public interest to build on sinkhole rock formations that would have been considered out of bounds had it not been for a culture of corruption and collaboration between landowners, developers and politicians?

But this is all in the past. It’s a new year and DAAR has new leadership.  Let’s give them a chance to redefine their understanding of “mutual interest” and to distance themselves from corruption. If you know DAAR members, talk to them. And if you know of a better alternative, post a comment. If the new DAAR leadership is going to follow the lead of the old, the apologists had better get to work.

11 thoughts on “Give DAAR a second chance”