Here’s a brief stroll down memory lane to get us started, and lest anyone think that Dick Black has become even slightly less batshit crazy, behold his current state of mind. 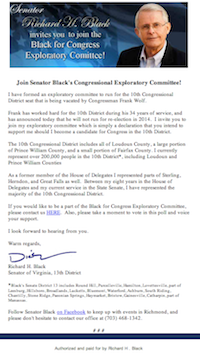 I have formed an exploratory committee to run for the 10th Congressional District seat that is being vacated by Congressman Frank Wolf.

Frank has worked hard for the 10th District during his 34 years of service, and has announced today that he will not run for re-election in 2014. I invite you to join my exploratory committee which is simply a declaration that you intend to support me should I become a candidate for Congress in the 10th District.

If you would like to be a part of the Black for Congress Exploratory Committee, please contact us HERE. Also, please take a moment to vote in this poll and voice your support.

I look forward to hearing from you.