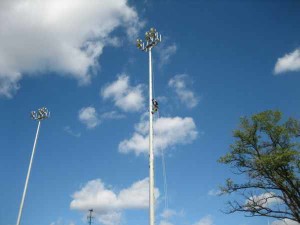 We in Western Loudoun came here to these rolling open spaces because, among other things, we enjoy the dark night sky with its starlight, the heavenly map of constellations, that faint ribbon of smoky light called the Milky Way, and the flashing meteor trails disintegrated by our atmosphere.  We are closer to the nature that existed before humans cluttered this earth with disrespect for the gift of life found in nature.

We feel pangs at the ever-approaching ever-encroaching polluting clusters of artificial light that obscure the night sky.

Nor is this loss of the night merely an aesthetic preference for fainter light.  These blazing lights compromise wild life including birds, salamanders and frogs.  Endangered species of bird – the Cerulean Warbler and Henslow’s Sparrow, according to the Loudoun Wildlife Conservancy – crash into these light towers.

If you want a more brilliant natural night light, practice patience for when you can mount a horse in the moon light to hack along the still wooded pathways and take note of the distinct moving shadow that you cast on the ground.  Walking on foot is almost as good.

So why are we invoking the dark skies?  Because they are at risk.

Our Board of Supervisors assured landowners in Western Loudoun in 1994, “Not to worry,” that the elevated playing fields of Franklin Park near homes West of Purcellville would not have to worry about any sky scraping towers of glaring artificial light as they were expressly prohibited

These concrete assurances turned into an evaporating mist recently.

Supervisor Janet Clarke insisted, “Let us have lights anyhow.”  She just doesn’t get Western Loudoun – and I’m beginning to think she may not ever – and what’s rural and special about Western Loudoun is therefore at risk as long as she’s a voice in our affairs

Our current Board of Supervisors (with two notable exceptions) disregarded these past assurances with a vote approving a $1.2 Million outlay of taxpayers funds to keep our children playing under artificial light on school nights until 9 PM.  Now there’s a prescription for scholarly achievement!

The Director of Planning, Julie Pastor said, “There is no mitigation measure that is available to reduce the impact of the lights.”

Board Chairman Scott York said he opposed “putting the lights way up in the air in the middle of Western Loudoun.”

Supervisor Geary Higgins said he shared Scott’s concern, and the fact that an earlier Board assured citizens these lights were forbidden.

The community recoiled when Ms. Clarke made her proposal.  They did so in person, by phone and e-mail.

When the Planning Commission held hearings, 22 of the 23 speakers argued to keep the night skies dark, as originally promised.

The Planning Commission voted to respect the prohibition.

The County Board wrung its hands collectively when reducing the School Budget but a majority of the Board is unconcerned about spending $1.2 Million on lights for playing fields; neither Mr. York nor Mr. Higgins supported this wrong-headed proposal.

There is a lot of political posturing by some elected officials about how unfair it is for the government to take the property of real property owners.  But that reservation against government taking was nowhere to be found among most of the Board when it brushed aside the unambiguous prohibition against lighting up the sky, when it overruled the objection of the residents affected, when it contravened the Planning Commission vote. Thus has the Board compromised the enjoyment and value of the real property that these citizens own close on in and further away from Franklin Park.

The lesson learned is that you can’t rely on the promises of past Boards when you’re asking this Board to enforce those promises.  Not a reassuring way to govern!