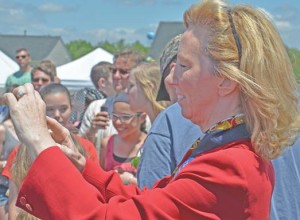 Delegate Comstock now wants the voters in the 10th Congressional District to promote her to the U.S. Congress.  How to trust Ms. Comstock when it comes to resisting the hoggish corporate handouts that she successfully lobbied congress to give away?

Ms. Comstock was a top level aide to Attorney General John Ashcroft at the Justice Department while Ashcroft was in charge of the investigation of former White House VP Chief of Staff, I. Lewis “Scooter” Libby.

Mr. Libby was investigated for unlawfully blowing the cover on clandestine CIA Secret Agent Valerie Plame, risking “agency” assets around the world, as a media reprisal against Ms. Plame’s husband for his special report finding that no uranium cake went from Africa to Iraq for nuclear fuel or weapons.

The CIA was furious, and demanded a real investigation, not some fast once-over by then AG Ashcroft; U.S. Attorney Patrick Fitzgerald was appointed as a Special Prosecutor.

Ms. Comstock left the Justice Department four days after Fitzgerald’s appointment, and she raised a substantial treasury of cold hard cash to defend Scooter Libby as the legal defense fund’s committee chair, against the investigation begun while she was the Justice Department’s Director of the Office of Public Affairs.

Ms. Comstock suffers from ethical astigmatism for confounding her role in a department investigating a subject, with then defending that same person.

We also have to wonder about Ms. Comstock’s declared judgment as a candidate who will defend our nation – “fighting to protect our national security,” she says – when she fought with all her strength and will to defend a man who compromised CIA confidentiality in order to blur and conceal what the Administration really knew before it invaded Iraq in war.

During the recent Republican primary, Ms. Comstock said that she could bring women back to the Republican Party.  It is difficult to believe that any woman wanted her to support transvaginal ultrasound probing or treating a fecundated ovum as a person but that’s Ms. Comstock’s legislative record as a delegate.

On the subject of getting around Northern Virginia, Ms. Comstock voted against raising the money to repair crumbling highways – the 2013 Transportation Plan – a Plan supported by a Republican Governor and her party leaders.

One final salient example of Ms. Comstock’s character and political judgment is her undisputed vote in the democratic presidential primary in 2008 “for” Senator Barack Obama.

We can ask why Ms. Comstock chose Senator Obama, and gave him her insincere vote, moving him infinitesimally closer to becoming President.  The answer is that her vote was a manipulation of process, the voting process, devious even.  Don’t we already have enough tricksters in politics without advancing Ms. Comstock’s toxic influence into the US Congress?  The remedy is simple.  Don’t vote for her!

3 thoughts on “Taking stock of Comstock”