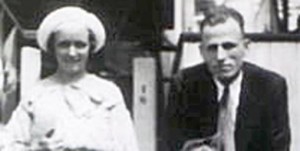 My maternal grandmother, Catherine McCoy, was born in Ireland on May 9, 1897 and was baptized according to the Rites of the Catholic Church in the Church of St. Patrick, Crossmaglen, in the County of Armagh.

Even in her sixties, you were certain that Grandma Catherine must have just breezed in from Ireland the day before because, what this delicate lady described, with her slight brogue, and her blazing blue eyes, was a vivid word picture of honest hard working folk, in Irish villages and towns, helping each other and trusting in their faith to make it all right.

Catherine knew Ireland, in all its glorious wonder and sorrow, through her father’s eyes, from many dinner table conversations, while coming of age in America.  The spirit of Ireland, born in her, was nurtured by her parents, and defined who she was.

There are “Irish” born in America, who have never been to Ireland, who feel they’re from Ireland, that somehow it shaped their character, making them who they are.  They relate their courage, grit, verbosity, love of people, faith and fight from their Irish antecedents.  They tap a foot to an Irish tune, strain to mimic a Gaelic phrase, feel a soulful connection, and swell with pride before the Irish tri-color flag representing the division between north and south separated by a white bar, signifying that often elusive peace so desired.  These Irish are Americans through and through but they are tugged by the waves and currents of that distant windswept island and tied to those shores by one of those fabled Irish fisherman’s knots pictured in the Book of Kells.

In America, there are 34 million persons who have an Irish family tree, a branch outstretched across the Atlantic, to an Irish County, village, and sept.

The Irish-American will tell you, at the drop of a cap, of their forbears’ historic role in the American Revolution and every war since and, in politics as well, how one-quarter of our Presidents had Irish ancestors.  Yeats wrote, “It is an Irish curse to dream things the world has never seen.”  But the Irish fight to make their dreams come true.

St. Patty’s Day invokes the tugs and ties back to Ireland for the Irish diaspora.  For years, I was asked if I’d been “back” – as if I’d been born there.  So I have gone to experience Ireland for myself.  What I found was an unimaginable green country cut through with roads sometimes so narrow that the bushes and trees sometimes “hug” both sides of your car, with horses grand and strong to ride if you’ll just stay out of their way when mounted, and a people so friendly that the simplest request for directions down the road prompts a Joycean dialogue about all the sites and neighbors along the way.

The beauty of the Irish is that you truly need not have an Irish ancestor on St. Patrick’s Day.  After all, St. Patrick himself was the son of a Roman-British army officer, and thus not Irish at all.  So, on his day, all are Irish in spirit, in the spirit of St. Patrick, who celebrated what’s best in each of us.