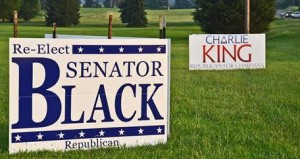 Those hosting the signs no doubt make the lame protest – we can do what we want with our property, or with the consent of the property owner. Well, there really are some things one should not do. And maybe there should be a law about this – if the current freedom comes unrestrained by responsibility.

You know you can get permits to put up these signs. That’s a policy of dubious value. Of course, many of these 4 and 5 foot squares proliferating throughout the County are not actually authorized by permit. Not that you’ll see any enforcement against the offending scofflaws, and the taking down of any of these signs.

My main point is that the existence and placement of these signs shows us what these candidates really think of us – that they must SHOUT at us – akin to the disrespectful e-mail equivalent of writing in CAPS.

Maybe the candidates are concerned that near-sighted drivers won’t see their signs – somewhat fatuous – especially when most near sighted folk wear corrective lenses.

The real reason is they’re afraid we’ll miss their sign – and so their intent is to distract us from driving – hey, see my name over here – writ large – not a good thing for them to admit – though it’s true.

Most of us these self-adulatory proud boards, a visual pollutant by any fair standard, prove that these wannabe officials do not treasure our countryside and their manner of expression is comfortable with demeaning the voters.

What to do? Tell these wannabe officials – TAKE DOWN THOSE SIGNS! And watch to see what they do – or fail to do. Then vote accordingly.

1 thought on “Take down those signs”