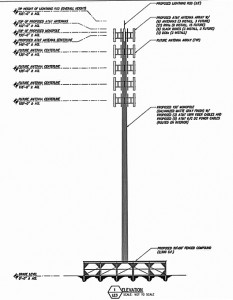 The community is gathering its forces to give our public officials a spinal implant and to stop AT&T, on the merits, and based on the County Ordinance, from erecting this 155 foot monopole, and setting a bad precedent for projects on the crest of the mountain. 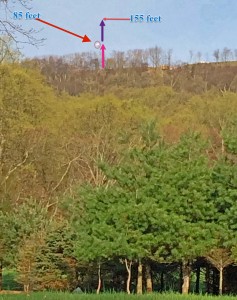 The arrow marks a balloon at about 85 ft above the crest, and the full height is estimated (courtesy photo)

Lovettsville resident, Dave Carmichael, said: “There hasn’t been a tower placed on a Loudoun County Ridgeline since the enactment of the County’s ordinance protecting those scenic spots in the early 1990s.  To do so now will roll things back thirty years and open the door to lighting up our ridge-lines like it was Christmas “

Melani Lyn Carty agreed, “The proposed location for AT&T’s 155-foot monopole at AT&T’s ridge-top property at 12355 White Rock Road, Purcellville, at the top of Short Hill Mountain, as indicated on the official pre-application paperwork submitted to the Loudoun County Department of Planning and Zoning, appears to violate the Loudoun County Strategic Land Use Plan for Telecommunications Facilities.”

The Telecommunications Plan states that monopoles shall not be located along ridge lines, but down slope from the top of ridge lines, to protect views of the Catoctin, Bull Run, Hogback, Short Hill, and Blue Ridge Mountains.

The Loudoun County Department of Planning and Zoning confirmed that “[t]he location of the proposed telecommunications facility on the ridge of Short Hill Mountain on the subject property is not supported by Plan policies.”

Melani said, “In my opinion, there is no gray area in the Telecommunications Plan, and AT&T should be required to comply.”

Melani said the Telecommunications Plan says ‘[t]he subject property is governed under the policies of the Revised General Plan (RGP) … [placing] the property within the northern tier of the Rural Policy Area … planned for rural economy uses and limited residential development.’”

“The property is also zoned AR-1 (Agricultural Rural 1) and is located in the Mountainside Development Overlay District (MDOD),” said Melani, “and the policy for this area recognizes the importance of maintaining the scenic and historic character of the area.”

Nor is that the end of it.  Laurie Hailey said, “The proposed site is within the secured government facility yard.  Yet AT&T says that they’ll be adding 3rd party antennas to their proposed mono pole.”

“This is totally improbable,” Laurie said, “how is this possible, as the FCC dictates that any 3rd party must have 24-7 access to the pole in case of outages or repairs … and you can’t get access without the proper credentials to this secure facility.”

“There is also some concern,” Laurie said, “about the amount of radiation a ‘macro cellular tower’ emits to the homes below.”

Melani concluded, “AT&T is really going to have an ‘uphill battle’ with their application for this site.  AT&T should give up on the Short Hill location — and find a site that actually complies with the zoning ordinance instead of violating it.”