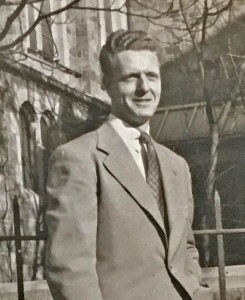 When younger, a child, your child, is the Gerber creation, a puffy cheeked, but still inarticulate goo-gooing charmer, consuming your every eager and cherishing attention without end or complaint.  And you wouldn’t have it otherwise.

There are the parental touches, for comfort, amusement, the cooing assurances, the baby talk, the light play, washing, dressing, cleaning, among the many acts that introduce your child to a world of sensation, of caring and of love.

Anything less would be neglect, and we know random or failed attention to a child’s needs in any familial or institutional setting prompts, among other things, poor impulse control, social withdrawal, problems with coping and regulating emotions, low self-esteem, pathological behaviors including tics, tantrums, stealing, self-punishment, and poor intellectual functioning.

Good parents, Dads and Moms, prepare their children for the world coming at them.

And here’s the rub.  It is never over.  They are always our children no matter that they become adults.

Children pass through us but never quite escape our concern.

We make them when they decide to mimic our good character but they can hardly hear or take seriously what we say if we don’t do what we say.

My first neighborhood was in the South Bronx, not a great place, but we didn’t know any better, and took the bad with the good, spending our time, in the streets, playing stick ball, running the back alleys, and engaging in a fair ration of fist fights.

My Dad was a plumber, electrician, and carpenter and had a sky blue Belvedere Plymouth blessed by a local parish priest.

My Dad had no use for bullies and there were some adults who would manhandle kids, not that often, but it did happen.

Coming home one day, my Dad was driving down the street looking for a parking spot and heard me shout, he saw a man grabbing me, yanking my arm.

I heard the Plymouth screech and saw my Dad leave his car in the street, run between two parked cars, and tear down the sidewalk, shouting to this thug to “let my son go,” but he didn’t respond, kind of froze, and, in that still moment, my Dad grabbed him by the neck with his left hand, pushed him hard back against the brick building, and punched him straight in the face with a powerful right.

We didn’t have a police officer on that street; it was the South Bronx.

I don’t live in a place like that today.

But you have to ask yourself, what would you do to keep safe your son or daughter under similar or worse circumstances?

Children are being murdered and abused yearly in large numbers in Guatemala, Honduras and El Salvador.

Would you try to bring your son or daughter from such danger in Central America, overland, past gangs, and stifling poverty to seek asylum in America, believing that’s what our American law promises — if your claim of danger is genuine?

Would you believe it was a bait and switch if, when you arrived at the American border, after making such a hopeful pilgrimage, that you were arrested for a misdemeanor, denied bail, and your children taken from you?

We know when you separate a child from his or her parents, toxic stress is a likely effect, disrupting a child’s brain development.

Jesus once cursed lawyers who lay grievous burdens on others while not lifting a finger to lighten the load.  (Luke 11: 46).  But to burden children and family when no law requires this imposition is unforgivable.

We cannot celebrate ourselves as parents, on Father’s or Mother’s Day, if we do not welcome strangers, escaping grave danger, and resist confinement for those truly aggrieved and at risk, and separated from their children.

Scripture cautions, if this is how we treat the least of us, it is the same as abusing Jesus himself, the Son of God, and may expect no better than everlasting punishment.  (Matthew 25: 34-46).

Every Dad and Mom knows that, if we are to be judged by our own children, it’s what we say and do to make this right.