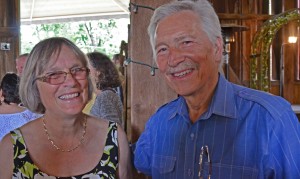 Malcolm Baldwin last wrote to say “these are astoundingly disturbing times” and he had hoped to get together to talk about them, despite his annoying illness because, Malcolm said, “the head still works.”

By all accounts, until Malcolm wrote his last sentence in a draft op-ed on AR-1, on the day his life’s struggle ended, he was clear of mind and determined not to waste a minute of what was left of this mortal coil.

Seneca wrote that it’s not that life is so short, it is instead that so much of it is wasted.

Not a moment was wasted in Malcolm’s case.

Malcolm wrote Phyllis Randall, the County Chair, to say that “I’m doing fine with not being immortal.”

I knew Malcolm in full flight when we fought with a combination of citizens against PATH’s toxic coal powered lines, his wife Pamela close by his side.

Like every good struggle, the outcome remained in doubt until we prevailed.

But it was an effort greater than the sum of its participants, and Malcolm was happy to be of use in a good cause.

Malcolm did not rage against the imminent darkness closing in on him; rather, he was driven instead to have some final salutary effect, no time or inclination to rage, not in his final moments, so set still to make a difference for the better, so determined, that it can be imagined that his resolve must have hovered in the air over him even after his last conscious breath with his family gather about him.

There have since been deserving comments by those who agreed and disagreed with Malcolm but who were grateful for his contributions and effort; hell, even husbands and wives hardly agree all the time.

At the Rural Summit this past Friday, Malcolm’s efforts were invoked, and there was a special section just to “remember” Malcolm.

His daughter, Rebecca Fuller, spoke of her father, also a grandfather to her gifted children, stating, “He was largely lucid to the very last…one thing as he spent his last day of life, he spent the last morning dictating the final touches on an article he was writing about the AR-1, the right  … and he was determined, a little cantankerous about it, to see that it got done ….”

“Daddy and I always shared something that we felt that we had in common,” Rebecca said, “He was a philosophical pessimist but an operational optimist.  By that, I think he meant that he knows that bad things happen, that humankind isn’t always its best self.  That’s where the philosophical pessimism comes in.  But the operational optimism comes from getting up every day and being determined to make that world a better place, to change those baser instincts in humanity.”

Rebecca said, “He was, as he would tell many people, probably you heard him say, he was a secular humanist.  He did not necessarily subscribe to some of the beliefs of his Judaeo-Christian background that he grew up in.  So where he is now is based, instead of some image of heaven or anything, it is based on what he believes about the world being full of beauty and full of love.” 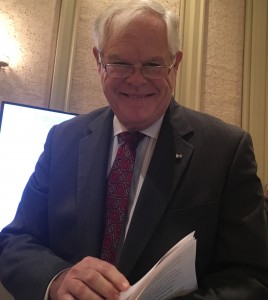 Chuck Hedges was a close friend who had a weekly lunch with Malcolm, and one day, Malcolm made a request that Chuck officiate at a wedding, a re-wedding to Pamela, his wife of 45 years.

“They came to me,” Chuck said, “to do this, and I said, Malcolm I’m a Quaker, I would just stand there and say nothing,” shaking his head, liked he’d be lost doing this, “and they said, ‘We’ll have the script for you and so forth.”

Chuck said, “I was so honored to do that.  People came from all over.”

The service was in August at the Baldwin farm, Weatherlea.

There was no question of the re-wedding happening.

“They were committed,” Chuck said, “and [Malcolm] had the strength to go through with it.  It was really nice.” 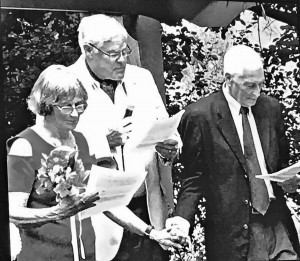