We’re not talking about Beatle George Harrison’s twangy tune, “Here comes the sun,” but the true power of the sun, even 93 million miles away, to warm our houses, cook our food, and keep our desktops humming on social media.

The simplest way to describe how solar does its work is that sunlight contains photons, packets of energy, that strike silicon cells, creating a flow of electrons and those electrons (traveling in one direction, a DC current) are harnessed in solar panels, later, usually “inverted,” so the current is AC, alternating, and then used in the domestic (and commercial) activities that are now mostly fossil fueled. 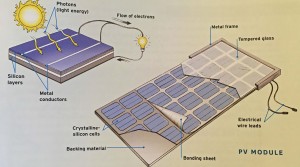 Of course, when the sun is hidden behind a heavy misty rainstorm or the sun is obscured by clouds overhead, there is no energy getting through; and that can be picked up if you’ve stored excess energy in batteries when there was sunlight.

For a similar reason, it matters that the angle of the sun striking the silicon cell panels placed on a house or on the ground in a field is best when the sunlight is direct.

“I thought about it for awhile, going solar,” said Brian Palmer, “for as long as three years, and I was on a list with Solar City, and went ahead to make a plan when Tesla bought Solar City .  I was drawn to it.  It started with a thought about a generator.  We considered that first.  But solar was clean energy and I thought to go with solar.  I liked Tesla’s slim profile panels.  They look good, and they are not visible from our driveway.  They had a sales team that gave us several options.  Our array of solar panels with all the costs was $28,000, but we make monthly payments on this investment, at a 2% loan rate, and we’ll get a $12,000 tax credit from the government for going solar.  So we think it pays.  Now we’ve been with our solar system for about a year. We do ‘net metering.’  That means we don’t pay Dominion for the energy we use that we collected.  Only what we use that we get from Dominion.  At our peak, we get 1,100 kilowatts a month from the sun.  You can see the Dominion meter go backwards as our solar energy feeds into the system, reducing what we owe Dominion.  Our biggest saving are the air conditioned days of the summer.  But Dominion limits the system.  You don’t get paid for an excess of what you need.  We also planned to have a battery to store energy for when our system is not collecting energy.  We’re waiting for that now, and will put it in the basement.”

Erin Palmer said, “I was not for this proposal at first.  I resisted.  Brian convinced me.  And since it’s been working, Brian tells me, I told you so, and repeatedly, but I’m a believer now, and our original difference is a joke we share.” 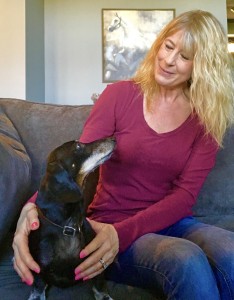 Erin Palmer, with Neo, their dachshund

Virginia is not the best state for solar power.

But Maine has had a fight for years over whether there could be a charge for producing and using solar energy in your own home or business without ever touching the utilities’ grid.

Outgoing Virginia State Senator Jennifer Wexton (on her way to Congress) introduced a bill in the General Assembly, SB 1208, that would have allowed “for a profit or non-profit entity which may be an entity entirely owned by or consisting of subscribers” to own and develop a shared solar project.  Jennifer modeled her bill after how this is done in Colorado’s community solar program.   But Dominion gutted the bill, basically removing “community” control.

Solar United Neighborhoods (VA SUN), headed up by Aaron Sutch, was reportedly critical, saying, “Real community solar is when the community, not a monopoly utility, owns and develops a shared solar project.”

Dominion seeks to have a stake, even control, over this power source, as we shift from fossil fuels to renewable sources, so this is subject to some intense lobbying in Richmond.

That said, Brian’s experience, going solar, remains a great idea for any homeowner who wants to do something for the environment and save on energy cost.

There are various online apps to get some idea what saving you might have, based on where you are located (latitude and longitude)(and think facing South toward the sun), and what programs you can use in Virginia (while we wait for “real” community solar).

Incidentally, Brian said if you want to ask him about what he’s learned, he’d be glad to tell you.