“For what do we live, but to make sport for our neighbors and laugh at them in our turn?”

It’s a jingle, it’s bad, and he put it on his website. However, it’s early it the cycle and, as mistakes go, this one’s at least amusing.

I put some shoe leather in for Jennifer Wexton yesterday. She and I walked my neighborhood gathering signatures for her petition to get on the ballot. We had a great time visiting with my neighbors and talking with a star-struck youngster who thought it was really cool that Stevens and I live around the corner from her.

Jennifer has what it takes to win, and she’s committed to it. She did over 40 doors with me, and then went and did over 40 in Leesburg in the afternoon.

And speaking of candidates who are doing well, have any of you seen Mike Kondratick‘s VPAP filing this period? He’s the 25th in the state for money raised. WAY TO GO, MIKE!!

Have you heard the one about OpenBand, the wholly-owned subsidiary of MC Dean, Inc.? OpenBand is the cable/Internet provider for some local HOAs, among other things. OpenBand’s service doesn’t exactly engender a lot of positive feelings among many of its customers.

Well, OpenBand’s cable franchise agreement is up for renewal by the Board of Supervisors this year. Franchise renegotiations and renewals like these are on a regular, known schedule. Cable companies, like OpenBand, pay very close attention to these schedules. At times, you can actually see their responsiveness to their customers swell as the deadline for franchise consideration creeps closer.

It is worthwhile to also pay attention to a cable company’s political donations as franchise renewals come up for consideration. For example, here in Loudoun County people affiliated with OpenBand’s corporate parent, MC Dean and Companies, donated $4,500 to Eugene Delgaudio (and $1,000 to Lori Waters) during the 2007 election cycle, and another $5,500 to Delgaudio overall. MC Dean’s OpenBand franchise would be considered by the Board elected in 2007, after all. END_OF_DOCUMENT_TOKEN_TO_BE_REPLACED

This had been a post inviting everyone to come to a panel discussion Stevens was a part of earlier today…but because I was in a hurry, I failed to post it to the front page. Then, trying to fix it from my phone, I seem to have deleted the contents of the post.

Today, technology and I had a misunderstanding.

Tomorrow, I hope, will be better. 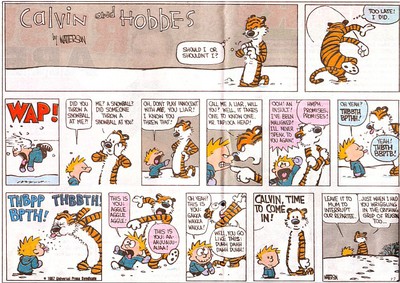 One of my favorite Calvin and Hobbes cartoons of all time

Click here for full-size
via Pactiss.org, comic by the incomparable Bill Watterson.

It’s that time of the year again. The time of year when flowers bloom, trees leaf out, and canvassers go knocking.

So, I’ve broken out my sneakers and I walk over a mile every day to get ready for the door knocking that is to come.

This year, you’ll see me walking for Jennifer Wexton, Mike Kondratick, and anyone running against Eugene Delgaudio, amoung others.

Who are you walking for?

(crossposted at The True Adventures of the Doorbell Queen)