Mr. Trump broke his sworn oath of office to uphold the constitution as confirmed by several federal courts, finding his executive order was unconstitutional; Mr. Trump bragged he’d appeal; he has not. END_OF_DOCUMENT_TOKEN_TO_BE_REPLACED

The targeted books so far have to do with race relations or sex that consider our nation’s failure to fulfill its unfulfilled promise of equality, and a complex of issues that affect the human condition including our youngsters. END_OF_DOCUMENT_TOKEN_TO_BE_REPLACED 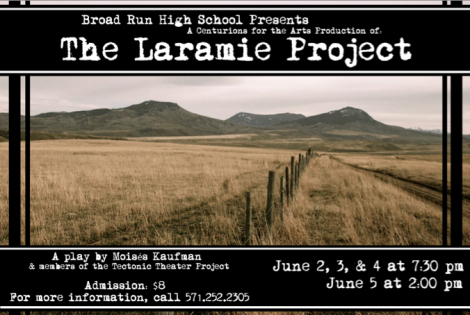 END_OF_DOCUMENT_TOKEN_TO_BE_REPLACED

Loudoun Out Loud Kickoff:
Leave a comment below if you want to attend.

A bit of background: As recently as 2005, some members of the Loudoun County School Board were discussing a policy that would have prohibited the presentation by our public school drama departments and clubs any work that acknowledges the existence of GLBT people. That ridiculous situation, largely created by former delegate Dick Black and some of his family members, was provoked by a student’s original work. See Equality Loudoun archive. Although the policy eventually adopted by the board did not include unlawful viewpoint discrimination, the debate (which included threatening hate mail and some atrocious behavior at School Board meetings) did result in a chilling effect. The message was, as one drama department head put it, “Don’t poke the bear.” That era of self-censorship has now ended with the announcement that The Laramie Project has been selected as the spring play at Broad Run High School.  This is wonderful news, and when we have all the details we’ll post them here. This award-winning play has been presented by many, many high school drama departments – as it should be.

Here is some more wonderful news: Loudoun will now have a PFLAG support group, and counselors in our schools will have appropriate material to provide to GLBT and ally students seeking support.

Metro DC PFLAG (Parents, Families and Friends of Lesbians and Gays), is starting a gay, lesbian, bisexual and transgender youth and parent support group to meet in Sterling.

Leave a comment below if you would like to come and you will be provided location information.

The groups will meet every fourth Sunday during the same time.

It’ll be interesting to see who actually opposes these things and decides to make an issue of it. Would those really be good campaign issues? Advocating that kids be exposed to bullies and told they don’t deserve any help? Preventing parents and children from trying to keep their families together? I get the feeling there aren’t many bears left to poke, not ones of any consequence. We’ll see.

[Note: Meeting location information redacted at the request of organizers in favor of soliciting RSVPs. – P13]

Back in August, those who wanted to see holiday displays continue on the grounds of the Leesburg courthouse were vocal champions of the First Amendment.  The grounds should be open to everyone, they said, and they were delighted to have the ACLU on their side. Here are some typical comments on the Loudoun Times-Mirror site at the time, in response to those who argued that all displays should be prohibited:

“Public property should actually be FOR the public, and allowing public use by all is not “establishing” any one of them. Everyone should have equal access, in my opinion.”

“Let everyone have an equal chance to display.”

“If we are to protect individual freedom, we must protect the ability of all to express their opinions, whether we personally agree or not. Allowing freedom isn’t abridging it, and a free for all is just that:  free.”

“Tolerance means to respect (and ALLOW) others their differences.  Their difference doesn’t harm you by existing, even if you disagree with it.”

“I think it would be nice if displays could continue, and include not only serious representations of beliefs involving faith and/or no faith, and yes that would mean we’d have to welcome the onanism of the attention seekers too.”

“The American Civil Liberties Union, AG Ken Cucinnelli, Barbara Munsey, many others, including myself all say the same thing: no harm in allowing all points of view.”

That last comment is from TMitOH, by the way – the individual who rounded up all the angry speakers by leading them to believe that the board was poised to ban the baby Jesus, or send them to prison for wearing Christmas sweaters, or some such thing.

We were additionally told that raising concerns about vandalism and escalating animus due to the perceived offensiveness of this or that display was fearmongering about a “non-existent” security issue, that once the equal access policy was implemented the agitation would “run its course” and settle down, and that democracy is messy and can make people uncomfortable (with this I agree).

Well, it’s not August anymore, and the equal-access-for-all crowd has morphed back into the special rights crowd. The fun started when the ten lawn spaces were assigned to the applicants exactly as advertised; on a first-come, first-served basis. Complaints ensued. The nativity scene should automatically get the favored corner spot no matter who applied first, argued the complainants, because of “tradition.” Well, equal access law doesn’t grant super-special privileges to any faith tradition on that basis, and neither does our policy, so the answer to that was “no.” The policy adopted by the board is exactly what was praised by the ACLU and embraced by the pro-display, pro-freedom of expression public.

Judging from the comments on the current LTM article, the policy they were so in favor of then is now completely unacceptable. The problem now is that other points of view are “defacing” what they feel is their exclusive Christmas display privilege. Pointing out that there is no such special privilege gets one called “pig” and “freak.”

This is what I told the board in early September:

“Back in 2008, there was a holiday display and invocation that included the Christian, Jewish, Muslim and Sikh faith traditions. Some people did make valid arguments that it shouldn’t be at the courthouse, and I respect that. Maybe a different public site would address those concerns – I can’t speak for others.  But in spite of that I think, rather than making people angry, it brought them together. I wish it could have continued in that direction. And that was the first and last time that happened.

Now what we have is anger and division. I’m not saying that most of the people upset about this are trying to divide us; I don’t think that’s true. But the loudest voices, and the voices getting the most attention, are the militant ones – and no matter what you decide, the people who are angry now are still going to be angry, either because there are no displays, or because they don’t like the other displays.“

Look, I’m not particularly clairvoyant, nor do I possess any other special powers. You could see this coming ten miles away.  It’s not very jolly, is it? Nor very Christian. I’m not sure she’s explained this fully, but could it be that the person who created the “Letter from Jesus” display – she used to be a Christian, and now identifies herself as an atheist – left the faith because of behavior like this? Who could blame her?

The text of “Letter from Jesus” is in the comments over there. It’s worth a read.

And please, don’t forget to check out Loudoun’s Alternative Gift Fair. Happy Holidays – all of them – to all.