June was very, very active  — as usual.   Thanks to the wonderful team of volunteers supporting our campaign.

I spoke to around 500 Islamic parishioners, mostly voters.   These people are wonderful citizens who enrich our society.  Very sad that there are so many misperceptions of their values and aspirations.   Also spoke to many in the Hispanic community, who as with the Islamic community, feel a great deal of distrust of the Republican agenda.

I campaign every day, even on Sunday.  In June, knocked on most of the doors in Loudoun Valley Estates, plus many below Braddock and lots in Stone Ridge and South Riding.  Lots of  friends also helped on weekends.    Lots of non-HOA citizens and stores along Route 50 got attention.   Also attended events.  Sponsored a hole at a PTSA golf tournament with proceeds going to help children, plus many meetings with leaders in Stone Ridge and Brambleton, unions, Loudoun Valley Estates and some national Democratic leaders.  More on that later on.  Spoke to the Board of Supervisors on our plan to build jobs in Dulles and expand our tax base without raising taxes.  Lots more.  A very busy month indeed.

Disappointing seeing the Republican party breaking rules and acting in a rude manner in South Riding.  Just don’t see how they think such behavior will gain votes or respect.

Visit us on facebook or come to loudoun4roeder.org.  Larry Roeder 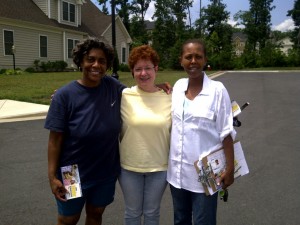