Patricia Phillips is incensed at the treatment of Soviet communist veterans in Virginia. No, really. Here’s the picture of the veteran from her most recent, utterly misleading, mailing. 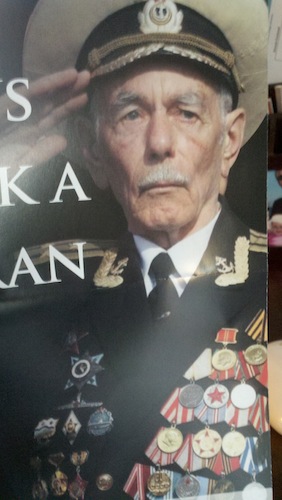 Note all the red stars on the medals? Or how about the “CCCP” on the one to the right of the coat’s button? And it’s pretty clearly a profile of Lenin on the medal in the top row. Clearly this veteran served the USSR with distinction! How horrible to have been treated so badly by Virginia!

In all seriousness, though, it would behoove a candidate for state Senate in the state with the largest U.S. Naval installation in the world to at least avoid using a picture of the enemy that Navy was built to defend against for fifty years in her political mail. This is more than just politics 101, this is a question of respect for the voting public who did serve.

What is with Loudoun Republicans and their inability to look at a picture and see what the rest of us see? From bloody doorways to Presidents with headshot wounds to, now, a picture of the wrong Naval veteran, Republican candidates and committees are incapable of actually looking at what they’re putting out there!

Credit where credit is due:

Too Conservative got there first.

And credit to the many veterans in the Loudoun County Democratic Committee who noticed the Soviet officer immediately and brought it to our attention.

5 thoughts on “Patricia Phillips is Pro-Communist”