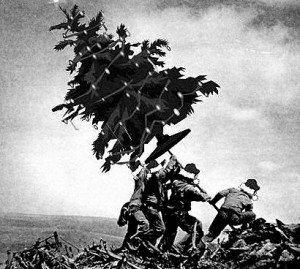 One of those individuals is John Mileo, who had a design proposal for the rest of the committee. But first, he had to explain his reasoning.

For some inexplicable reason, the Christmas holiday…has evolved into a season that many feel the need to be viewed as inclusionary to people of all faiths and cultures and beliefs.

Of all the holidays…Christmas appears to be the only one where a call for inclusion occurs.

Um. Maybe that’s because it’s a federal holiday? We’ll have to get back to that.

My recommendation for the December, 2012 courthouse displays is as follows: In order to [inaudible] that Christmas Day is the only holiday occurring in the month of December, or during the so-called holiday season, that has officially been established as a federal holiday, which is also celebrated by our state and county, I hereby propose that this committee recommend to the Loudoun County Board of Supervisors…that the 2012 county-sponsored displays set up on the grounds of the Loudoun County courthouse be limited to only those that pay homage to Christmas. Taking this position the county should be able to defend itself against any [inaudible] or public outcry about it not entertaining displays that represent other holidays that occur during December, which are not recognized by the government. To do otherwise, in my opinion, would surely open the floodgates to inclusion of the type of offensive displays that have been displayed here in the past.

Got that? He goes on to specify that the county-sponsored display he proposes should have the following elements:

A crèche or nativity scene, inclusive of the Baby Jesus in a manger, the Virgin Mother and Father Joseph on either side, plus three farm animals, perhaps two sheep and an ox.

Six foot [inaudible, but I believe was a description of a Santa figure].

And this howler, included as an “option”:

A small sign placed adjacent to the crèche, asserting that this display in no way is to be construed as an endorsement of any particular religious belief.

There were two other similar proposals. The remainder of the meeting was a discussion of what elements other than a crèche are absolutely necessary in order to get away with displaying a crèche, and whether Mileo is correct in his view that it’s not necessary, and could be dangerous, to include a menorah. “If a menorah is allowed,” he warned during this discussion, “where do you draw the line?” The committee members broke into two distinct camps, pro- and anti-menorah, but at no point was the debate framed as anything but whether a menorah had to be included along with Santa and/or Frosty the Snowman to provide “top cover” (yes, one member actually used that term to describe what they were attempting to do).

In the course of trying to figure this all out there was some very detailed discussion of what would make the crèche seem “too religious.” Apparently if the crèche is “really lit up” with the addition of angels and Latin inscriptions, it could be a problem (unlike those well known secular symbols, the Baby Jesus and Virgin Mary. But I digress).

Here’s a prediction: Ken Reid will swoop in (remember how he named himself “the Jew who saved Christmas”?) to save the day by insisting that there be a menorah. That will comprise the board’s “inclusion” pole. The current discussion may even have been planned in advance to set up that outcome.

There is so much more – for example, a lawsuit is a near certainty if religious content is sponsored, and will cost the county two million dollars (watch Rick Wingrove address the committee) – but that will have to wait for another day. For now, Mileo and others have concluded that because Christmas is a federal, state and county holiday, that means it’s permissible for the county to sponsor a display that is exclusive to Christmas symbols and messages, including overtly religious ones. It seems to me that they should have come to the exact opposite conclusion.

Then the only possible conclusion is that the elements of Christmas that government is endorsing by recognizing it as a federal holiday are, by definition, secular. This includes the element called “shallow consumerism” that is criticized by many people of faith and of no faith alike, but it also includes the shared experience of celebrating a holiday associated with family, community and good will toward all. That’s why there would be very little objection to a county-sponsored holiday display that is truly secular. There are people on either side with extreme views: That there should be absolutely no displays at all, or that there must be overtly religious content included. I am not saying that these views are not valid, only that I think there needs to be compromise.

There is a third way that allows “people of all faiths and cultures and beliefs,” if they so choose, to celebrate Christmas as an inclusive community. After all, it’s a federal holiday.

Holiday display solution moves forward
Ken Reid decides to invite lawsuits
“A brave stand”
Occupy Chanukah and Christmas
Leesburg courthouse, December 2011 (photo album)
Does this look like hate speech to you?
How to ruin a ‘positive statement of belief’
Ken Reid justifies mob rule
Once More, With Feeling
Eugene Delgaudio’s pants are on fire, again
I hate to say I told you so, but…
Get the Popcorn
Needed in the boardroom: A little reason
Judges Offer Opinion
Debates, Distractions and Religious Freedom
‘Tis the season for cheap political grandstanding
Solving the holiday display impasse