York is on the board of the NVTA.

“Why would Leesburg want to bite the hands that feed them transportation funds? I would suggest that the most important thing for the mayor to consider is the likelihood of [road projects in Leesburg] ever being funded if the Town Council comes out in opposition”

The forty-five mile road will cost over $1 billion. I’d hope that York and Chase have a better argument for the project than “shut up or we’ll punish you.”

Maybe they don’t. The #1 goal of the parkway is to “Support Economic Growth” and the first object of that goal is (emphasis mine) to 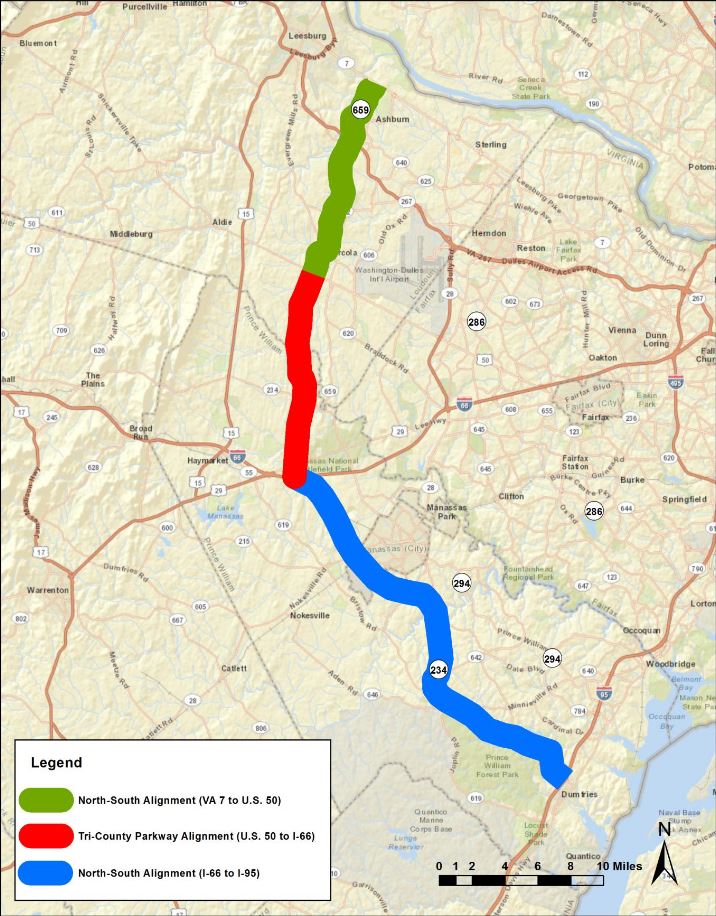 If you look at a satellite image of the area, you’ll notice lots of green to the west of the corridor. That’s what the NVTA must mean by “projected growth.”

“Our alternative is designed to address the much greater need for east west commuter movement and to provide for dispersed, local north south movement for current and future traffic.”

I know that politics is a tough business, that there is arm twisting and compromise, but is it typically this uncivil? Supervisors York and Higgins have disparaged the PEC, referring to their “projects or programs” as if the PEC’s lobbying for smart land use is like Chase’s NVTA lobbying for developer profit.

Now they threaten elected officials for thinking about the problem on behalf of constituents. Isn’t that thought control? There’s a parallel in Egypt where Mohamed Morsi and his Muslim Brotherhood party were ousted by the military after just one year in power. Morsi won the popular election and he won a constitutional rewrite referendum, but his style was autocratic and he consolidated power exclusively within his religious base.

Greedy developer interests are like a religious base that funds tyrannical elected officials’ campaign coffers. They then use elections to impose “God’s design” for their pet “projects or programs” on citizens. “God” must have an office in the NVT Authority/Alliance. His human proxies will get their just deserts, hopefully sooner rather than later.

2 thoughts on ““God” is alive! His office is in the NVTA”