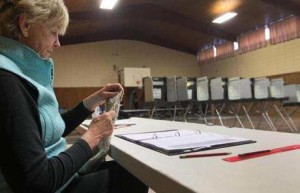 Close to home, we are having a special election in late January 2014 to fill State Senator Mark Herring’s seat for the 33rd District because Mark is becoming the State’s Attorney General.

Republican Delegate Joe May wants to fill that post.  Joe complained, however, that he wanted his Republican Party’s nomination “process” to be a “firehouse primary,” thought to be more “democratic,” as opposed to his party’s preference for a closed door party caucus.  510 persons attended the caucus that Joe disapproved.  348 participants chose the party nominee, John Whitbeck.  Of the 107,730 voters in that Senate District, 4/10th of 1% of the District chose John as the Republican nominee.

Now “we Dems” (as I am one) had the “firehouse primary.” There were more voters – 1,162 attended. Jennifer Wexton won the nomination with 729 votes.  Thus, Jennifer was selected by 6/10th of 1% of the total voting population to be the Democratic nominee.

Less than some student elections!

If you had presented yourself to be a candidate, you would have been strongly “discouraged” by either party.

We need to select our candidates with real primaries drawing upon the entire voter population from outside the insiders’ preferred circle, and to bar false partisans from voting in the “other” party’s primary by requiring party registration.

We need to institute proportional representation voting, meaning you identify your 1st, 2nd and 3rd choices for a candidate, and, when throwing out the low vote candidate, add in the voter’s next choice and so on, re-tabulating until there’s a “winner.”  This method guarantees both partisans and independents will gain representation proportional to their voting strength.

Third, who represents you is predetermined by a line drawn on a map by the party in control of the legislative chamber that seeks to perpetuate its control.  We talk after every ten-year census about creating independent commissions to draw these lines fairly – but it doesn’t happen; it must.

Fourth, that ocean of money the contributors pour into campaigns distorts the public dialogue with manipulative propaganda forcing the choice each party promotes.  Paid purveyors of fear and hate, by half-truths and lies, tear apart the opposing candidates, driving voters to hesitate to vote, burying voters in tons of disinformation, and gossamer-thin, airy ambiguities about what they might really do about jobs, transportation, education, health, or anything else.

Fifth, we have more laws, rules and methods to shrink absentee voting, same day voting, and to bar the door to voting at all for some; we must strike these unconstitutional constraints on the right to vote.

This is a hit list of how we can make our vote count so our government is truly by all the people – and not just the select few who would manipulate who may represent us.

8 thoughts on “Our Closed Political System”